Gujarat Congress MLA Vimal Chudasama was on Monday evicted from the Legislative Assembly on the orders of Speaker Rajendra Trivedi for coming to the House wearing a T-shirt. 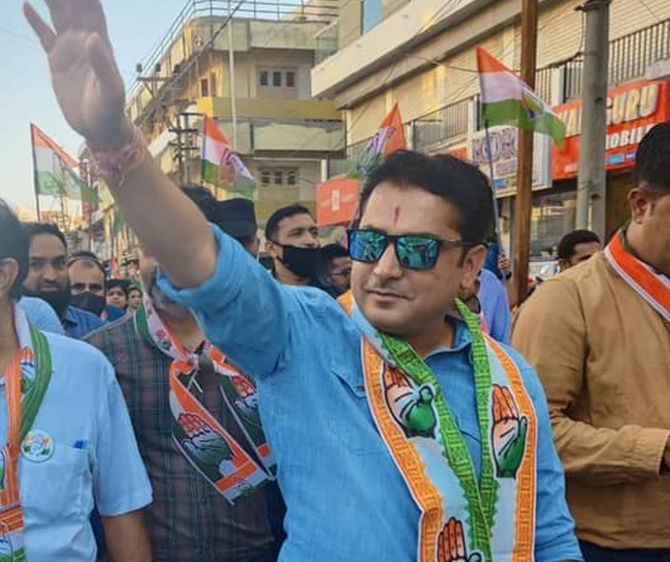 While the Speaker insisted that MLAs maintain decorum and refrain from wearing T-shirt in the House, the opposition Congress opposed Trivedi's decision, claiming there was no rule prohibiting members from wearing specific clothes while attending the House proceedings.

Around a week back, Trivedi had asked first-time MLA Chudasama not to come the House wearing a T-shirt and urged him to take care next time.

The Speaker was of the opinion that MLAs should either wear a shirt or kurta, to maintain their dignity and decorum of the House.

When Chudasama, 40, who represents the Somnath Assembly seat, again came to the House wearing a T-shirt on Monday, Trivedi reminded him of his earlier instruction and asked him to come back after wearing a shirt, or a kurta, or a blazer.

Upset with the Speaker's order, Chudasama argued there was nothing wrong in the T-shirt and that he even did campaigning wearing the same outfit and won the Assembly poll.

"I sought votes wearing a T-shirt. This T-shirt is a certificate given to me by my voters. You are disrespecting my voters," Chudasama told the Speaker.

Unfazed, Trivedi insisted on a proper dress code for MLAs and asked Chudasama to leave the House and come back only after changing the T-shirt with something formal, like a shirt.

"I don't want to know how you approached your voters. You are disrespecting Speaker's order. You can't come to the House wearing whatever you want just because you are an MLA. This is not a playground. There are protocols to follow," said Trivedi.

As directed by Trivedi, three to four sergeants then escorted the MLA out of the House without using any force.

After his exit, Bharatiya Janata Party minister Pradeepsinh Jadeja moved a proposal to expel Chudasama for three days for 'arguing with the Speaker'.

However, in a lenient approach, Chief Minister Vijay Rupani withdrew the proposal and urged Congress leaders to convince Chudasama to follow rules about the dress code.

"Even our minister Jayesh Radadiya used to wear T-shirt. But, he immediately changed it and came back wearing a kurta as soon as the Speaker pointed out. T-shirt doesn't look good inside the House. I urge Congress leaders to convince Chudasama," Rupani said.

Coming to Chudasama's defence, some Congress members claimed there is no such rule about dress code.

"The MLAs must have the freedom to chose their attire. Nowhere it is written that MLAs can't wear T-shirts. This is a violation of constitutional rights," Leader of the Opposition Paresh Dhanani claimed.