Cong members feel 'chintan shivir' will do them no good

Many in the Congress feel that holding meetings at the block, district and state level would reveal the real reasons for the Congress’s defeat in the Lok Sabha elections. Rediff.com contributor Anita Katyal reports 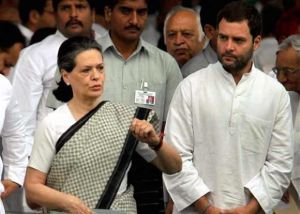 It has been two months since the Congress experienced its worst drubbing in the Lok Sabha elections. But instead of charting a roadmap, its members are debating about the nature of the introspection exercise it should undertake to pinpoint the reasons for its dismal performance.

There is a growing view in the Congress that instead of holding a chintan shivir, it would be better if the exercise is conducted at the block, district and state levels. This would ensure participation of a larger number of members from the grassroots.

A senior member of the Congress Working Committee told Rediff.com that past experience has shown that whenever a chintan shivir has been conducted, the focus invariably shifted from substantive issues to who should be included or excluded from the list of speakers.

“It often does not yield the expected results as members are busy lobbying to get their names included in the list of participants. Those who get left out end up complaining that their voices are being deliberately suppressed,” said a Congress general secretary.

Congress leaders say that if the exercise is held at different levels it would provide a platform to the cadres to share their inputs. Also, such a move will provide state-specific inputs and suggestions.

According to Congress insiders, the Andhra and Telangana state units have undertaken such an exercise and presented their results to the Antony committee set up by Congress President Sonia Gandhi.

The panel, headed by former defence minister A K Antony, has met state leaders, defeated MPs and Congress office bearers. However, the committee’s report is not yet ready although it was to be submitted to the party president earlier this month. This report is being anxiously awaited as the proposed organisational reshuffle and the party’s future strategies will be based on its recommendations.

However, the delay in the submission of the report has resulted in all-round scepticism about the exercise, especially after the leadership decided not to replace Maharashtra and Haryana Chief Ministers Prithviraj Chavan and Bhupinder Singh Hooda even before the Antony committee gave its recommendations.

“What is the point of setting up this committee when decisions are taken even before its report is submitted,” a senior Congress leader told Rediff.com.

Maharashtra and Haryana leaders who met Antony made a strong pitch for a leadership change in their respective states, failing which, they warned, the Lok Sabha results would be replicated in the forthcoming assembly polls. The Congress managed to win only one Lok Sabha seat in Haryana and two in Maharashtra.

Congress spokesperson Randeep Surjewala had a tough time on Tuesday explaining the delay in submission of the report. Stating that the panel members have held deliberations with most state leaders, all he could say was, “To my understanding and knowledge, they shall be giving a complete report of their perceptions and understanding after their conversations with various leaders.” Surjewala maintained that the Congress president and vice-president would “definitely peruse” the report once it is submitted and will take suitable action.

Ever since the declaration of the Lok Sabha polls result, a restive Congress rank and file have been seeking a complete review of the party’s dismal performance. They have been asking for a serious debate on rebuilding its support base and a revamp of the organisation to meet future challenges.

Their pleas fell on deaf ears and it was only after a prolonged period of silence that Antony was mandated to speak to all the concerned leaders and suggest remedial measures. The committee did provide a forum for the demoralised leaders to air their grievances but the exercise could prove futile if its proposals are not implemented honestly.

Congress cadres are wondering if the Antony panel will be in a position to give a candid assessment in its report. There is an increasing view in the party that its vice-president Rahul Gandhi did not have the requisite qualities to lead and inspire the rank and file or the electorate and that Sonia Gandhi should play a more proactive role in reinventing the party. The moot question is: will the party’s disillusionment with Rahul Gandhi find a mention in the Antony report.

For the moment, there is no word about the report or from the leadership on the way ahead. And from all accounts, the proposed chintan shivir may not be held in the near future. The leadership is currently busy with the ongoing session of Parliament which ends only on August 14. After the session, the party will get involved in the upcoming assembly elections in Maharashtra, Haryana and Jharkhand.

There is anger and frustration building up. This is evident from the public statements being made by party members, some even directed against the Gandhis.

The mood in the party is best summed up by a defeated Congress minister, “I don’t mind losing an election…that’s part of the game. But I will be able to pick up the pieces and battle on provided my commander is there to lead and inspire me. In this case, where is the party commander…he seems to have disappeared,” he told Rediff.com.