It's Congress vs Congress after Delhi poll debacle

A day after the party's rout in the Delhi polls, the knives are out in the Congress with leaders blaming each other and raising questions on whether the grand old party has outsourced the task of defeating the Bharatiya Janata Party to others. 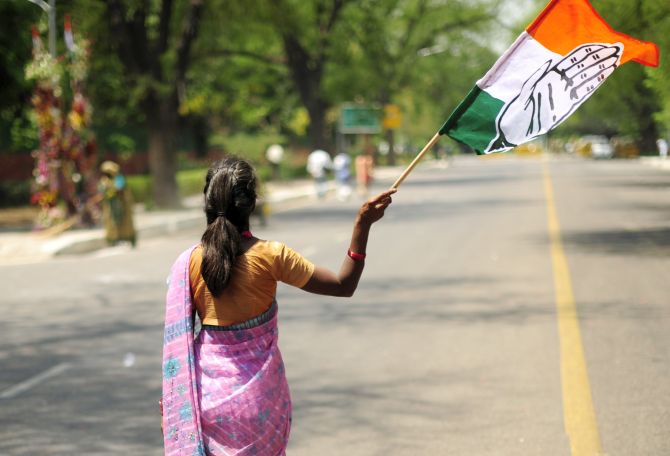 IMAGE: A woman walks with a Congress party flag in front of the headquarters of the Congress in New Delhi. Photograph: Keith Bedford/Getty Images

The party has, however, disapproved of the blame game and asked its leaders to introspect, instead of going public against each other.

The rebuff came after Delhi Mahila Congress chief Sharmishtha Mukherjee publicly asked party veteran P Chidambaram if the state Congress units should shut shop in case the party had decided that others would take on the BJP across states.

It also came after All India Congress Committee Delhi in-charge P C Chacko sought to put the blame for the party's decline in the national capital on late chief minister Sheila Dikshit, saying the Congress started losing ground here in 2013.

Dikshit was the Delhi chief minister at the time.

"The party's downfall started since 2013. It lost all the elections thereafter and the new outfit, AAP, took away all the Congress's vote bank," Chacko said, without naming Dikshit.

With party leader Milind Deora slamming him for his remarks, Chacko said he did not name Sheila Dikshit and his remarks were being wrongly interpreted to run a campaign against him.

"I did not name Sheila ji, who did good governance and ensured all-round development of Delhi during the 15-year Congress rule," he said.

Chacko's resignation was promptly accepted by Congress chief Sonia Gandhi on Wednesday, signalling her disapproval of his comments.

Meanwhile, Sharmishtha Mukherjee took on Chidambaram, who had welcomed the AAP's poll triumph in Delhi as a 'defeat of bluff and bluster'.

'With due respect sir, just want to know- has Congress outsourced the task of defeating BJP to state parties? If not, then why r we gloating over AAP victory rather than being concerned abt our drubbing? And if 'yes', then we (PCCs) might as well close shop!' Mukherjee said in a tweet.

Sharmishtha Mukherjee is the daughter of former president Pranab Mukherjee, who has been a Congressman all his life.

Slamming the leaders indulging in a public blame-game, Congress's chief spokesperson Randeep Surjewala said, "We want to categorically state that the Congress party strongly disapproves of the blame game, the allegations and counter-allegations being hurled upon each other by the Delhi leaders.

"It would have been better if Congress leaders in Delhi and elsewhere would have looked at, introspected upon their own roles, responsibilities, commitment to the party and defined their own duties towards the campaign in Delhi. Then things would have sorted out themselves."

He said the comments in public by party leaders were unwarranted and unacceptable.

The Congress will go back to the drawing board, to the last party worker in the national capital who toiled tirelessly bereft of any groupings, although it could not secure the support of people, Surjewala said.

"We will go back to the ordinary Congress worker and listen to his or her voice and consequently, redraw the leadership of the Congress in Delhi to act as a responsible opposition.

"I urge upon every Congress leader, every Congressman and woman of Delhi to look at his or her own responsibility and accountability as also at their duties and commitment to the party.

Surjewala lauded Dikshit's role during the 15-year (1998-2003) Congress rule in Delhi and hoped that 'the pioneering work done by her does not wither away or get wasted by the politics of blame game and one-upmanship between Prime Minister Narendra Modi and Chief Minister Arvind Kejriwal'.

The Congress drew a blank for the second consecutive time in the Delhi Assembly polls and its vote share plummeted to 4.26 per cent from 9.7 per cent in 2015.

Deora slammed Chacko on Twitter for his remarks, saying, "Sheila Dikshit ji was a remarkable politician and administrator. During her tenure as chief minister, Delhi was transformed and Congress was stronger than ever. Unfortunate to see her being blamed after her death. She dedicated her life to Congress and the people of Delhi."

Dikshit's former aide Pawan Khera wrote on Twitter: 'Just a data point. In 2013, when we lost, Congress vote share in Delhi was 24.55 per cent.

Congress leader Shashi Tharoor posted an Urdu couplet on Twitter, saying one was taking pride in someone else's victory, even in the party's defeat.

'The Delhi results are disappointing for Congress but there are consolations: the BJP's divisive politics has been repudiated with their rout; AAP's development message is what has prevailed over identity politics; and 8 months after sweeping the LS polls the winners have been rebuked,' the former Union minister said in another tweet. 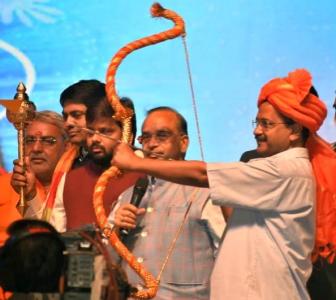 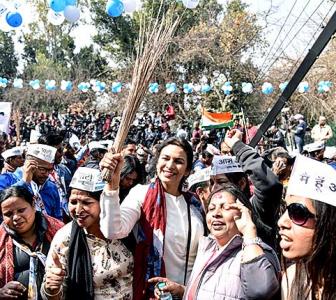 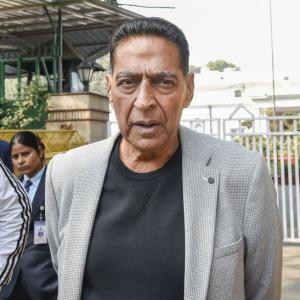 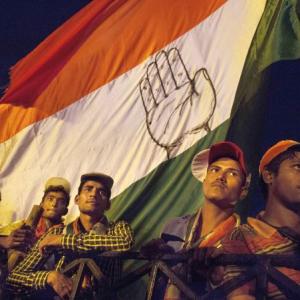