Be it Dalit assertion or championing the cause of social justice, egalitarian icons Babasaheb Ambedkar, Buddha and Periyar E V Ramasamy have been characteristic of political symbolism to promote the rights of the oppressed people. 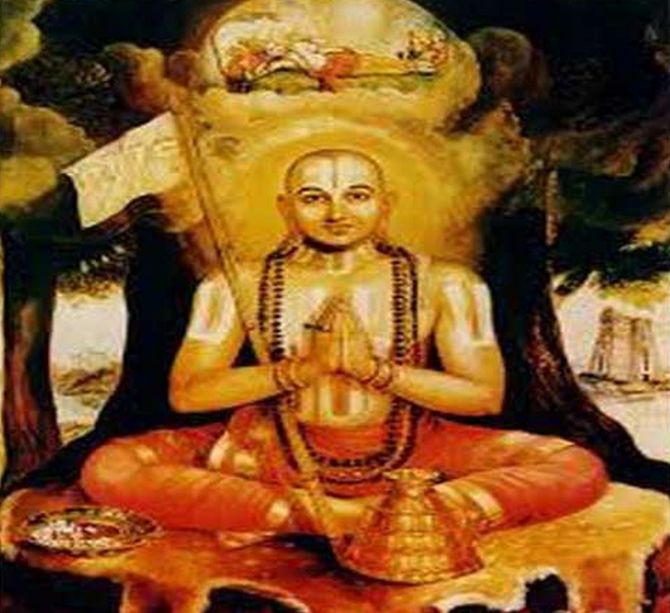 IMAGE: Sri Ramanujacharya lived in the 11-12th Century AD and is revered for his spiritual work in regions including the present day Tamil Nadu, Karnataka and Andhra Pradesh. Photograph: ANI

In Tamil Nadu, though reformist spiritual giant Sri Ramanujacharya was a crusader against discrimination who nurtured equality almost a millenium ago, the broad canvas of social justice had only an occasional place for him.

Congress Legislature Party leader, K Selvaperunthagai, a native of a village off Sriperumbudur where Ramanuja was born said the revoluntionary leader was sidelined over the years.

"Now the time has come to propagate his lofty ideals of social justice and equality. The present generation should learn about him to build a society that does not discriminate anyone," he said.

The Hindu saint lived in the 11-12th Century AD and is revered for his spiritual work in regions including the present day Tamil Nadu, Karnataka and Andhra Pradesh.

"All are enthusiastic about the forum that is set to be launched. We are going to invite Chief Minister M K Stalin for the event."

The forum is an initiative towards faciliting a change for the better in society, to eliminate discrimination on the basis of caste and creed and to promote social justice and nurture harmony.

A 1,000 years ago, Ramanuja championed the cause of the Dalit people, fought against caste discrimination and proclaimed that all are 'Sri Vaishanavas,' the MLA elected from Sriperumbudur Assembly (Reserved) segment said.

"Imagine the kind of difficulties Ramanuja would have faced a millenium ago," he said.

Undoubtedly, Ramanuja was a revolutionary leader, a pioneer and a forerunner of Ambedkar and Periyar, he said.

While even renowned philosphers like Aristotle and Plato defended and justified slaverly, Ramanuja was the first to declare that "Uyirgalukkul Bedam Illai," which meant that all human beings and life forms are equal and just the same, he said.

"Though Thirukoshtiyur Nambigal warned Ramanuja against disclosing to anyone the mantra of Om Namo Narayana, the key to attain moksha, Ramanuja climbed the temple tower and preached it to the poor and ordinary people. It was a revolutionary act. The saint did that despite being warned that he will go to hell if he revealed the mantra," the Congress leader said.

This was just only one example to illustrate his principle of equality and justice for all, he added.

"The proposed movement is apolitical and everyone is welcome to join it."

Selvaperunthagai's office has a framed portrait, the kind of which is very unusual and showed his admiration for the saint.

While Ramanuja is featured in the middle, the left and right sides has images of Ambedkar and Periyar respectively.

"But for renowned Tamil poet and Dravidian ideologue, Bharathidasan who addressed Ramanuja as 'our Ramanuja' (as a mark of respect and praise) and Dravida Munnetra Kazhagam patriarch Karunanidhi, no one else in the Dravidian movement took note of him," S Ramachandran, historian and noted epigraphist said.

In 2015, DMK patriarch M Karunanidhi wrote dialogues for a television serial on Ramanuja.

It was broadcast by Kalaignar TV and the late Chief Minister had praised the saint saying he rallied around the backward classes and oppressed people.