The Congress on Friday held nationwide protests and ran an online campaign against the Centre's decision to conduct Joint Entrance Examination and National Eligibility-cum-Entrance Test examinations amid the COVID-19 pandemic, with party chief Sonia Gandhi urging the government to listen to the voices of students and act according to their wishes. 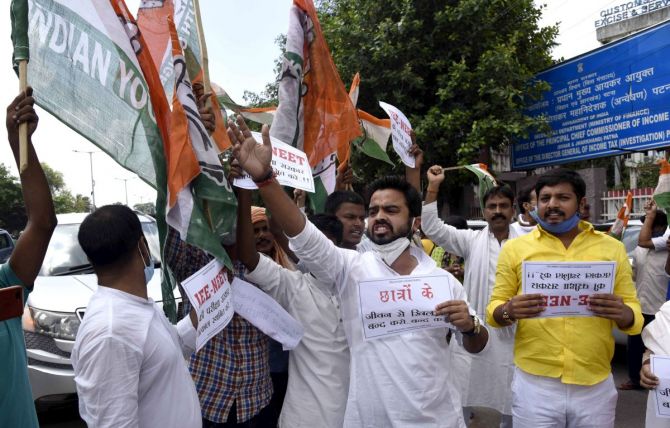 IMAGE: Congress workers demonstrate during a protest against the central government for conducting NEET and JEE exam amid the coronavirus pandemic, in Patna. Photograph: ANI Photo

Congress leader Rahul Gandhi also urged the government to hold a conversation with students over the issue of conducting NEET and JEE exams amid the pandemic and take a decision after arriving at a consensus.

Various opposition parties, including the Congress, have demanded that the NEET and the JEE be deferred due to the COVID-19 pandemic and floods in parts of the country, even as the Union government has made it clear that they will be held as per schedule with due precautions.

Six ministers of opposition-ruled states on Friday also moved the Supreme Court seeking review of its order permitting the Centre to conduct NEET and JEE exams this year amid the persisting pandemic.

Congress general secretary (organisation) K C Venugopal, in a statement, said students across the country are agitating and demanding to postpone the JEE-NEET exams, scheduled to take place next month in the middle of the COVID-19 crisis, with the government taking an 'unjustifiable intransient stand'.

He said the Congress stands with the students and the party wants the government to listen to their voices so that students' safety is ensured in flood-affected areas like Bihar and Assam. 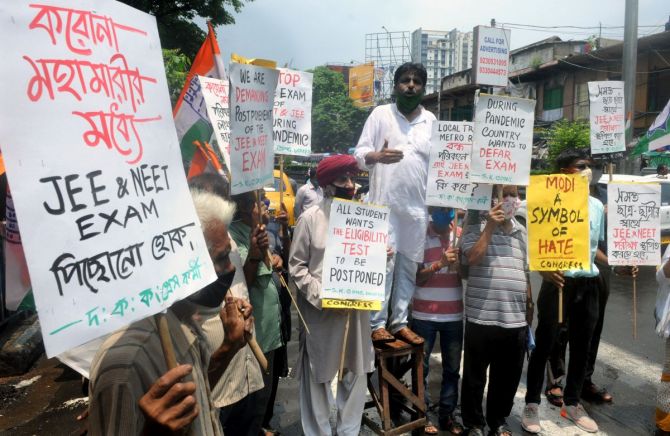 As part of the Congress' day-long campaign, the party posted Sonia Gandhi's message to students and the government on the issue of conducting the exams.

"I feel for you because you are now facing a very difficult situation. The issue of your exams, of when they should be taken up is the most important issue, not only for you but for your family," Sonia Gandhi said in a video addressing students.

"You are our future. We depend on you to build a better India," she said.

Therefore, if any decision has to be taken regarding students' future, it is important that it is 'being taken with your concurrence', she said.

"I hope the government listens to you, listens to your voices and acts upon your wishes. This is my advice to the government," she said in the nearly minute-long video posted on the Congress' Twitter handle with the hashtag 'Speak Up For Student Safety'.

Rahul Gandhi tweeted and also put out a video in support of students.

'NEET-JEE aspirants' safety should not be compromised due to the failures of the government. Government must listen to all stakeholders and arrive at a consensus,' he tweeted with the hashtag 'Speak Up For Student Safety'.

With the tweet, Rahul Gandhi also tagged a video of him urging the government to listen to students and take a decision only after reaching a consensus.

"You are the students and you are going to take this country to new heights. Everybody understands what has happened over the last three or four months," he said in the video.

"Everybody understands the mishandling of COVID-19, the devastation that has been caused, the economic destruction, the pain that this country has had to bear.

"Now what I don't understand is why you should be held responsible and why further pain should be imposed on you," Rahul Gandhi said, addressing students.

Alleging that the government has been incompetent, he asked why the Centre should force anything on students.

"It is important that the government listens to the students, they are wise, they have the interest of this country at heart and any decision that is made with regard to these exams is made after a conversation and after a consensus has been developed and this is my message to the government," he said.

The Congress undertook countrywide protests and online campaigns to amplify the voice of millions of students and their guardians against the 'mindless decision' of the central government, especially the education minister, to conduct the JEE-NEET examinations amid a raging and uncontrolled pandemic and debilitating floods, Venugopal said.

"The Coronavirus situation is getting worse each day with India now adding nearly 78,00 cases every day. In grave times like these, it is prudent that we deal with the present scenario in a way that protects our country's future," he said.

But even as infections rise and cases pile up, the BJP government wants students to cram into examination halls to write NEET and JEE main exams early next month, putting into danger and at stake the very lives of nearly 24 lakh students who have applied to take these tests, Venugopal said.

The 'SpeakUpForStudentSafety' hashtag trended on top on Twitter worldwide for four hours with more than 21 lakh tweets and counting, the party said.

The Congress, on its official Twitter handle, said the government must be fair to all citizens when taking decisions.

"We urge the BJP government to consider the implications of holding the JEE & NEET exams right now. Listen to the students and then take a decision," the party said.

It also posted videos of several senior Congress leaders voicing their opposition against holding of the exams. 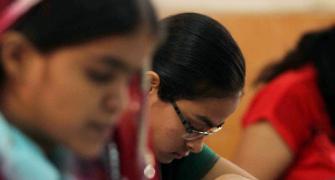 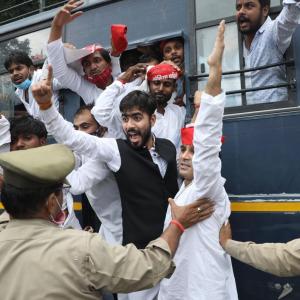 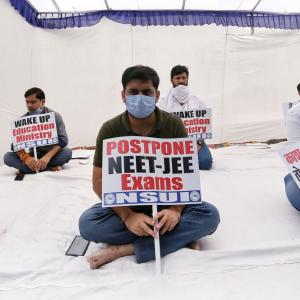