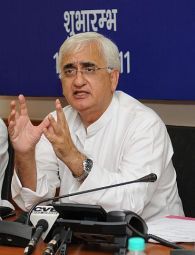 Union Minister Salman Khurshid said that the decision to ban VHP's 84 Kosi yatra has been taken by the Samajwadi Party government of Uttar Pradesh and Congress had nothing to do with it.

"Congress has no hand in putting brakes on VHP's parikrama programme and the Samajwadi Party government has imposed a ban on it", Khurshid said.

"Though everyone has the right to follow the traditions of their respective religions and governments should respect them, we are opposed to religion being turned into politics and made its tool," he said.

To a question, he said that though the Congress wants Rahul Gandhi to become the prime minister of the country, the last decision in this regard has to be taken by the party vice president himself.

When questioned on continued violation of ceasefire by Pakistan on the borders, the Union External Affairs Minister said Indian soldiers were giving a befitting reply to it to underline that we are not weak and are firm on the issue of security.