Cong has no divine right to head opposition: Prashant Kishor

The space represented by the Congress is vital but its leadership is not the 'divine right of an individual' particularly when it has lost 90 per cent elections in the last 10 years, poll strategist Prashant Kishor said on Thursday in an apparent swipe at Rahul Gandhi. 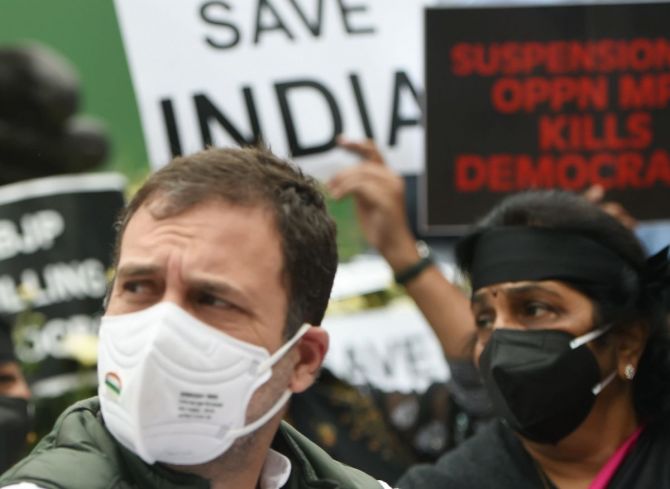 A day after West Bengal Chief Minister Mamata Banerjee's comment that there was no United Progressive Alliance anymore, Kishor, who has earlier been political advisor to various parties, also called for democratically electing the opposition leadership.

His remark sparked a sharp response from the Congress with party spokesperson Pawan Khera saying on Twitter, 'The individual being discussed here is pursuing his Divine Duty to struggle and save Indian democracy from the Rashtriya Swayamsevak Sangh'.

'A professional without ideological commitment is free to advice parties/individuals on how to contest elections but he cannot set the agenda of our politics,' he said.

'This bogey of Congress assuming a 'Divine Right To Rule' needs to be busted. Rahul Gandhi is carrying forward our rich legacy of a 'Divine Duty To Struggle',' the Congress leader said.

Khera also hit out at Banerjee saying that a regional leader who is not a part of the UPA claiming UPA does not exist is a bizarre claim.

Congress leader Kapil Sibal, a prominent member of the 'Group of 23', also called for opposition unity and said the UPA without the Congress will be a body without a soul.

His party colleague Anand Sharma, another 'G-23' member, said the Congress was the main national opposition party and remains a central pillar for a collective national effort.

He favoured a broad-based understanding and cooperation among secular, progressive and democratic political parties on people's issues to defeat the BJP.

"That is the need of hour. That will connect with people's expectation."

'The IDEA and SPACE that Congress represents is vital for a strong opposition. But Congress' leadership is not the DIVINE RIGHT of an individual especially, when the party has lost more than 90% elections in last 10 years,' Kishor had tweeted.

Kishor and his I-PAC team have been working for the Trinamool Congress since the assembly poll in West Bengal and are working on devising strategies in expanding the party nationally.

His remarks come at a time the TMC has made a conscious effort to not follow Congress' leadership of the opposition in Parliament and questioned the party's ability to take on the Bharatiya Janata Party.

A few months ago, Kishor had held talks with the Congress leadership over his possible induction into the party. He had also met former Congress chief Rahul Gandhi and there was serious talk over his entry into the grand old party but it did not materialise.

Kishor had taken potshots at the Congress two months ago as well, saying those looking for a quick revival of the opposition led by the grand old party following the Lakhimpur Kheri incident are in for a big disappointment as there are no quick-fix solutions to its 'deep-rooted problems'.

While Banerjee made remarks like 'there is no UPA now' and one can not achieve anything by staying abroad 'most of the time', Pawar said leadership was not an issue at present and all like-minded parties were welcome to join the fight against the BJP.

Interacting with members of civil society, Banerjee claimed she had suggested to the Congress that an advisory council of prominent personalities from civil society be set up to give a direction to the opposition but it was 'in vain'.

If all 'regional parties come together', it would be easy to defeat the BJP, she said.

The TMC has inducted several Congress leaders in its fold.

Recently, 12 out of 17 Congress MLAs in Meghalaya defected to the party.