A day after the Shiromani Akali Dal exit the National Democratic Alliance, the Congress on Sunday dared Bharatiya Janata Party allies, the Janata Dal-United, the Lok Janshakti Party and the Jannayak Janata Party to oppose the Centre and not to support the agriculture bills, which it alleged were like cancer and slow poison that will kill farmers and farming. 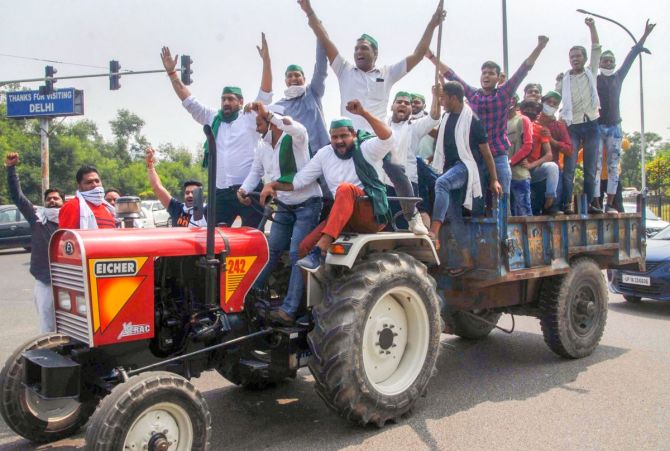 At a joint virtual press conference, Congress' Haryana chief Kumari Selja and Punjab president Sunil Jakhar urged all parties to come together and oppose the farm bills while asking the Centre to take back the legislations, saying these will make farmers "slaves of big businessmen".

The two Congress leaders also urged the President not to grant his assent to the bills as farmers are on the roads against them.

Selja and Jakhar said NDA allies should support the opposition parties, the same way they extended support against the Land Acquisition Bill, which the BJP-led Union government was forced to withdraw.

On the Shiromani Akali Dal's exit from the NDA, Jakhar said the party did not quit the ruling coalition of its own. It was forced to do so by farmers, who made it difficult for the Akalis to enter Punjab without doing so, he said.

Jakhar said the Akalis had only staged a drama of first quitting the Union cabinet and then the alliance as the BJP openly said that they were very much party to the clearing of the bills in the cabinet.

"The resignation by the Akali minister was not given but taken by the BJP and the Akali Dal did not quit the NDA of its own but were thrown out," he claimed.

The anger of farmers and the arrogance by the BJP has forced the Akalis to buy the permit of entering Punjab by enacting this drama,"Jakhar told reporters.

Selja dared the JJP, which shares power with the BJP in Haryana, to quit the alliance and stand with farmers in the state.

"The Akalis did a drama and it is time for other parties to think as people are asking questions. Farmers will be made bonded labour under contract farming and after the farm bills are implemented.

"We urge the BJP allies to think and stand unitedly with farmers and against the farm Bills. We appeal to all to stand up with the cause of farmers and protest the farm bills," Selja said.

Taking on the JJP, she said, "Leaders of the JJP abused the BJP ahead of the elections and after a fractured verdict in Haryana, joined hands with it. Dushyant Chautala should open his eyes and stand with farmers."

Jakhar said Devi Lal's soul must be churning in heaven on seeing his descendants support the "anti-farmer" BJP.

"The farm Bills are like cancer and its effect will be known later when this cancer will reach terminal stage and no medicine will work. This is like slow poison," he alleged, saying they are aimed at making farmers "slaves of big businessmen".

Selja said there are other parties like the Biju Janata Dal, the Telangana Rashtra Samithi and the YSR Congress who have been supporting the BJP when it needed their backing.

We want that they should not shut their eyes" and tell the Centre that people will ask questions from them, she said.

“Those who are part of the NDA, like the JDU and LJP in Bihar, should also think. Polls are approaching in Bihar, people will seek answers from them,” said Selja.

Selja said earlier a similar experiment was held in Bihar where farmers were told that they are free to sell their crop anywhere.

“But now everyone knows the fate of that experiment. Farmers were reduced to labourers,” she alleged.

“The AIDMK, AGP, Apna Dal and the Rashtriya Loktantrik Party too should think what is happening with farmers,” Selja said.

She said the country will not spare these NDA allies if they don't take a stand against the anti-farmer BJP.

When asked if the Congress will approach the NDA allies and other parties on the issue, she said, “They should listen to their conscience. They should decide whether they want to stand with farmers or those who have cleared the way for their exploitation at the hands of big companies and corporates."

Jakhar said among the NDA allies, he expects Bihar Chief Minister Nitish Kumar to take a lead and listen to farmers.