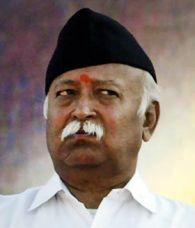 Criticising RSS chief Mohan Bhagwat for his statement suggesting that all Hindustanis are Hindus, Congress today said India is a multi-cultural and multi-religious society which has not accepted RSS ideologue MS Golwalkar's definition of 'Hindutva'.

"For last many days, we are hearing about purification. What women should wear and about new history being written. It is a matter of concern...

"India is a multi-cultural and multi-religious society and has not accepted Golwalkar's definition of 'Hindutva'," party spokesperson Anand Sharma told reporters.

Earlier in the day, Congress leader Manish Tewari said Bhagwat would be well-advised to read the Constitution which very specifically states that India is Bharat, a union of state, and the word "Hindustan" is nowhere mentioned.

Bhagwat had yesterday asked if inhabitants of England are English, Germany are Germans and USA are Americans then why all inhabitants of Hindustan are not known as Hindus.

Meanwhile, on the issue of Bhagwat not giving credit to any individual for BJP's stupendous poll, Sharma said this is trying to puncture one particular individual.

Bhagwat had on Sunday said that the BJP came to power at the Centre because the common man wanted change, disagreeing with the suggestion that the party's victory in the Lok Sabha elections was solely due to any individual's personal pull.

"This is between BJP and RSS. Let the BJP respond to RSS chief's comment not the Congress," Congress leader Rajeev Shukla had said outside the Parliament House today when asked about Bhagwat's comment about the reasons of the victory.