As the counting of votes progresses in Bihar, Rashtriya Janata Dal on Tuesday said the party is confident of forming the Mahagathbandan government in the state and asked its candidates and workers to be present at counting centres till the end as the electoral procedure will continue till late night. "We are in touch with all candidates and workers. Information received from all districts is in our favour. The counting will go on till late at night. We are assured of forming Mahagathbandan. Bihar has done the change. All the candidates and counting agents to be at counting centre till counting of votes is not complete," RJD tweeted in Hindi.

The early trends suggest yet another victory for Chief Minister Nitish Kumar with the National Democratic Alliance leading in the majority of seats in the 243-seat Bihar assembly. Tejashwi Yadav-led grand alliance is closely following the NDA's tally and it remains to be seen how both alliances would fare by the time the counting of votes is over.

The 243-member assembly is witnessing a fierce competition for the chief minister's post, and as per current trends, the NDA is comfortably ahead of the Opposition camp.

A party or coalition must secure 122 seats in the 243-member Assembly to form the government in Bihar.

Elections were conducted in three phases - October 28, November 3, and November 7, and the exit polls predicted the RJD-led 'Mahagathbandhan' to stage an upset for the incumbent NDA government.

As many as 3,755 candidates are in the fray this year. 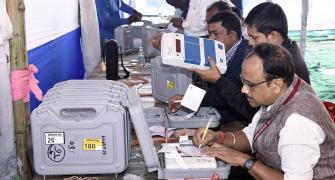 Hope, disappointment as NDA surges ahead of MGB