The Supreme Court on Monday granted four more months to the Tamil Nadu State Election Commission's (TNSEC) for concluding the poll process for the urban local bodies’ elections in the state. 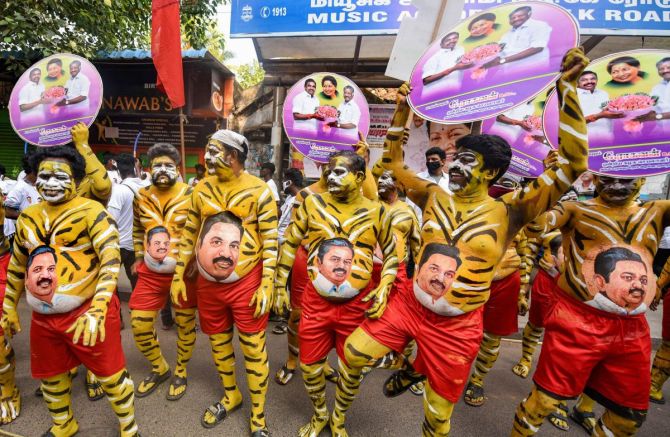 Kindly note that the image is being used only for representational purpose. Photograph: R Senthil Kumar/PTI Photo

The top court, on June 22, had granted an opportunity to the TNSEC to conduct by September 15 this year the local body polls in nine new districts carved out of four existing ones in Tamil Nadu and had warned it of contempt action in case of non-compliance.

A bench comprising Chief Justice N V Ramana and Justices Surya Kant and Hima Kohli took note of the submissions that now six more municipal corporations and 28 new municipalities have been added and some more time would be needed to complete the poll-related formalities.

"Even if the reasons are very silly, we want to give some more time," the bench said and asked senior advocate Mukul Rohatgi, appearing for the state poll panel, as to how much time he wanted for the TNSEC.

"Four months time," the CJI said, which was accepted by the state poll panel.

During a brief hearing, the bench expressed surprise over the consent of the PIL petitioner S Shankar, who had earlier filed the plea for holding of the local body elections, in the grant of extra time to the poll panel.

"Mr (P)Wilson (senior advocate) you have filed this petition for election. Now you are agreeing for the time and the adjournment," the bench observed.

The senior lawyer said the poll panel has to conduct elections for more than 600 urban bodies and now, six municipal corporations, 28 municipalities have been constituted and it will lead to a decrease in the number of existing 528 town panchayats in the state.

Earlier, the bench had taken strong note of TNSEC plea seeking 6 to 7 months more for concluding processes related to local bodies’ elections, saying the government can go for all elections except the local bodies.

"The government can do anything it wants to do. But whenever the issue of local bodies elections comes up, they say, no, no," the bench had said.

"This court vide order dated June 22, 2021, while disposing of the miscellaneous application, granted an extension of time till 15th September 2021 to complete the entire process including publication/notification of election schedule and the result thereof before 15th September 2021 as the Constitutional mandate to conduct elections in a time-bound manner cannot be defeated in any manner," the bench had said in its order.

The order had taken note of the September 13 notification of the TNSEC which said that no order was required to be passed as elections for rural local bodies were underway.

"So far as prayer (ii) in the said application is concerned, Senior counsel appearing for Mr. S. Shankar is directed to file an affidavit within a period of two days from today. List the matter after two days," the court had said on September 20.

The state poll panel seeks time for carrying out the preparatory works to complete the election process for urban local bodies as ordered by the top court.

A vacation bench, on June 22, had granted one more opportunity to the TNSEC to conduct by September 15 the local body polls in nine new districts carved out of four existing ones and had warned it of contempt action.

"We grant an extension of time till 15th September 2021 to complete the entire process including publication/notification of election schedule and the result thereof before 15th September 2021 as the Constitutional mandate to conduct elections in a time-bound manner cannot be defeated in this manner," the bench had said.

The top court was then hearing an application filed by the TNSEC seeking an extension of six months to hold elections to the local bodies in the nine newly carved out districts of the state.

It had then noted the order of the top court passed on December 6, 2019, and had said that instead of four months given to hold the elections, the poll panel has taken 18 months.

It had also been noted that the tenure of the local bodies expired in 2018-19 and since then there were no new elected representatives.

The bench had said that if the order of the court is not complied with, then the poll body will be liable for contempt action.

On December 11, 2019, the top court had directed the Tamil Nadu government and the state poll panel to conduct upcoming local bodies' elections by relying on the 2011 census instead of the 1991 census as alleged by the then opposition party DMK.

The court's earlier order had come on the plea of Dravida Munnetra Kazhagam (DMK), which had then sought quashing of the notification, issued by the state poll panel on December 7, 2019, for local body election alleging that it did not provide quota for women and SC and ST candidates as per the 2011 census and was using 1991 census for this purpose.

The top court, on December 6, 2019, had put on hold the elections for the local bodies in nine new districts, carved out of four existing ones, in the state for complying with legal formalities such as delimitation and reservation in four months.

It had been said however that TNSEC could proceed with the elections to all panchayats at the village, intermediate, and district levels in the remaining 31 revenue districts of the southern state.