A race among three predominant castes in Amalapuram who pursued a game of one-upmanship, and its unintended political consequences, appear to be the trigger for the violence and arson in the Andhra Pradesh town where the situation thankfully returned to normalcy on Wednesday. 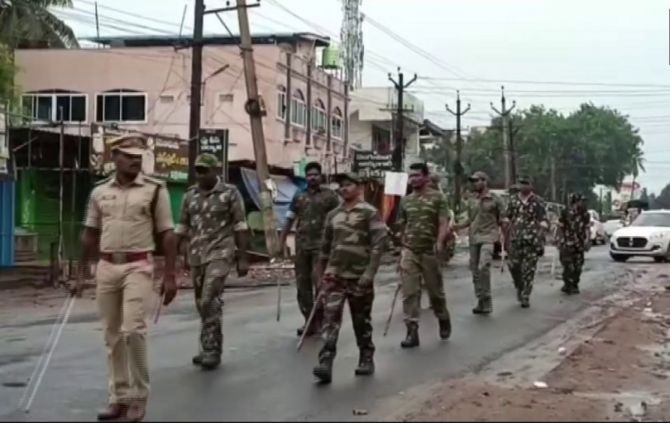 Though not very apparent, division of people along caste lines is a feature of the picturesque Konaseema region of Andhra Pradesh.

The forward caste Kapus, the backward caste Setti Balijas and the Dalits are the predominant social groups holding sway over the region and a key factor in deciding the fortunes of political parties.

Over the years, though such groups developed animosity towards one another, recently the Kapus and the Setti Balijas seemed to get closer sidelining the Dalits and this is seen as upsetting the 'political balance' particularly of the ruling YSR Congress, which is seeking to consolidate its Dalit base, according to an observer.

In 2019, the Kapus and the Setti Balijas threw their lot behind the YSRC and contributed to its massive victory but, three years down the line, their loyalties seem to have drifted. The fishermen community, which too has a sizeable presence in the coastal belt, is also said to be siding with the Setti Balijas of late, causing consternation in the YSRC camp.

The abrupt decision of the YS Jagan Mohan Reddy regime to rename the newly-formed Konaseema district as B R Ambedkar Konaseema district is being attributed by a section of local people to the ongoing changes in the political landscape in the region.

The arson in Amalapuram, headquarters of the new district, on Tuesday allegedly by those opposed to the name change is, thus, suspected by local political observers to be a result of 'political machinations' of 'vested interests.'

The violence snowballed into a political row with the ruling YSRC blaming the opposition parties, particularly the Telugu Desam Party and the Jana Sena, while the latter rebutted the charges with equal alacrity.

The police took Annam Sai, said to be a close follower of Transport Minister Pinipe Viswarupu, into custody as he allegedly led a mob attack. Incidentally, Viswarupu's was one of the houses torched in the arson.

Several ministers pointed an accusing finger at the TDP and the Jana Sena over the Amalapuram violence, alleging that Chandrababu Naidu was known for such “dirty politics”.

Hitting back at the ruling party leaders, Jana Sena chief K Pawan Kalyan on Wednesday said, "The YSRC leadership has this self-righteous attitude. They blame others for everything, even their failures. They had, in the past, even blamed the judiciary when things did not go in their favour."

He said it was a “well-orchestrated” plan by the YSRC to create a rift in the name of renaming the district.

The TDP also took strong exception to the YSRC's allegation that the TDP-Jana Sena combine instigated the violence in Amalapuram.

“The YSR family itself has a history of resorting to such violent acts. It was YS Rajasekhara Reddy who was behind the communal riots in the old city of Hyderabad. None other than the then chief minister (of erstwhile united AP) Marri Channa Reddy stated this. Likewise, Jagan instigated the attacks on Reliance outlets after YSR's death,” TDP state president K Atchannaidu alleged.

It was only to deflect the backlash from the Dalit driver Subrahmanyam's murder that the YSRC instigated the Konaseema violence, he claimed.