As farmers vowed to expand their protests over new farm laws, Prime Minister Narendra Modi on Saturday assured them that his government was committed to their welfare and that the legislations were aimed at giving them alternate markets to boost income. 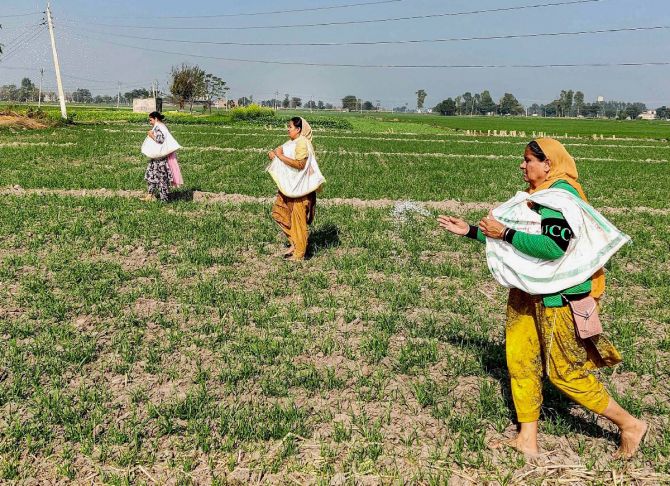 IMAGE: Women family members of farmers protesting in Delhi, work in fields in their absence, at Daun Kalan village, in Patiala, on Friday. Photograph: PTI Photo

Without directly referring to the farmers' agitation, which entered the 17th day on Saturday, Modi said agriculture reforms as part of government efforts are aimed at removing roadblocks, and the new laws will also bring in technology and investment in the sector.

The government, he said, is committed to protecting the interest and welfare of farmers through its policies and actions.

"Reforms will help draw investment in the agriculture sector and benefit farmers," he said at the annual meeting of industry body FICCI in New Delhi.

"The aim of all government reforms is to make farmers prosperous."

The new legislations, which were approved in the previous Parliament session, give farmers an additional option outside of the designated mandis to buy or sell their crops, he said.

"Farmers have now options to sell their crops in mandis as well as to outside parties," he said.

"While mandis are being modernised, digital platform is also available to farmers to buy and sell their produce."

These efforts are aimed at raising incomes of farmers, he said.

"All these efforts are directed towards improving the farmers' income so that they become prosperous. When farmers prosper, the country will prosper."

Hundreds of farmers from states like Punjab and Haryana have blocked some of the highways leading to Delhi borders for more than two weeks now against the new farm laws which they fear will prompt the government to stop making direct crop purchases at minimum state-set prices, called minimum support price (MSP).

They have vowed to expand their protests across the country until the government scraps the new farm laws.

The government has so far refused to heed to their demand but has promised to continue the MSP-based procurement.

The three new laws remove restrictions on marketing farm products and allow cultivators to engage with private companies to sell their crops.

This, the government says, allows farmers an alternate avenue to sell crops, raising their income and is aimed at making farming more competitive.

"After the implementation of recent reforms, farmers will get new markets and new opportunities and they will get help of technology. The country's cold storage infrastructure will become modern," he said. "From all these, there will be higher investment in the agriculture sector.

"The maximum benefit of these reforms would be to small and marginal farmers who earn there living on small plots of land."

Modi said the government has taken several initiatives to strengthen the agriculture sector.

"Today the agriculture sector has become more vibrant than the past," he said.

This ethanol is blended in petrol to cut India's oil import dependence and gives farmers remunerative prices for their crops, he said.

Modi said farmers will get technology and benefit from access to the market.

Expressing dissatisfaction over the limited participation of India Inc in the agriculture sector, the Prime Minister asked industries to show their interest and increase investment in the sector.

Unfortunately the India Inc has not made adequate investments in agriculture and private players did not explore the sector to its full potential, rather they worked in a limited fashion, he said.

Citing an example, he said, "The private sector's participation is not as per the desired level in cold storage and fertiliser manufacturing".

He said rural India is growing faster than urban centres in certain aspects of the economy and offers a prime market for investors.

Active internet user base in the rural India is higher than cities, he said giving an example.

"More than 50 per cent of the startups is in Tier II and Tier III cities and as many as 98 per cent villages are connected with PM Gramin Sadak Yojana.

"Now people in villages are getting connected to bazaar, school and hospital. The aspiration of people living in the villages are growing and they want social economic mobility.

"The government from its side is working hard to fulfil these aspirations," he said.

The recent launch of PM WANI project will provide public Wi-Fi services in entire country and connectivity would improve in villages.

"I would request industries to utilise this platform to participate in improvement of connectivity in rural and semi-rural area," he said.

Modi said the growth of 21st century would be supported by villages and small towns and so entrepreneurs should look to invest in these places.

"They should not miss the opportunity. The investment made by you will open new avenues for people in the villages."

"Policies of the government are designed to promote rural agriculture based economy," he said.

"The government is committed to protect interest of farmers through its policies and intentions."

"These are being removed."

The economy, he said, needs bridges and not barriers between sectors.

"A concerted effort have been made in the past few years to demolish these walls."

He cited the example of financial inclusion where the unbanked were given bank account, unique ID and affordable mobile data, which helped create the world's biggest direct benefit transfer system.