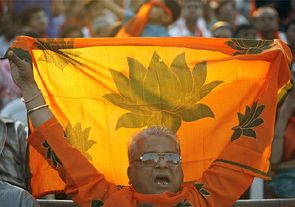 'You can fight to win leadership of a party, yet join party rivals to win a general election in the US. The fact that dissent is not rebellion is not really appreciated in India, where we are used to the 'High Command' culture,' says T V R Shenoy.

As Barack Obama dithered over Syria, Republicans pointed to a five year-old television commercial. 'It is 3 am,' a voice proclaimed, 'A phone is ringing in the White House,' going on to make the point that Obama was unprepared for a foreign crisis.

That commercial was made not by any Republican but by Hillary Clinton in 2008, while fighting Obama for the Democratic nomination for the American presidency. Eight months later, Obama asked Clinton to be his Secretary of State.

Barack Obama was inspired by Doris Goodwin's Pulitzer-winning book on Abraham Lincoln, Team of Rivals. Lincoln's rivals for the Republican nomination in 1860 were William Seward, Salmon Chase, and Edward Bates. Once elected, he offered them the top spots in his cabinet, namely State (External Affairs), Treasury (Finance), and Justice (Home Affairs). (The hierarchy is fixed by law in the United States.)

Historically, some of the most stinging attacks on American leaders came from their own partymen. Ronald Reagan's policy of cutting taxes while spending more on armaments was denounced as 'Voodoo Economics,'but that famous description was made by George H W Bush during the 1980 Republican primaries. Once the primaries were over, Reagan invited Bush to be his vice-president.

You can fight to win leadership of a party, yet join party rivals to win a general election. The fact that dissent is not rebellion is not really appreciated in India, where we are used to the 'High Command' culture.

Whether the 'High Command' is a family or an individual the rank and file of the party are expected to obey without question.

The Nehru-Gandhis set the template for dynastic parties with the Congress. Today, the Karunanidhi family rules the DMK, Mulayam Singh Yadav's clan leads the Samajwadi Party, the Thackerays govern the Shiv Sena, the Badals reign supreme in the Akali Dal, and so forth down to Jaganmohan Reddy with the YSR Congress.

Neither dynastic parties nor those led by individuals have any ideological moorings. In 1997, the Congress brought down the I K Gujral ministry because it had DMK ministers; in 2004 the same DMK became a favourite of the same Congress. Mamata Banerjee has served in both the Atal Bihari Vajpayee and Manmohan Singh ministries.

There is, however, some difference in the manner in which these two models treat dissent.

There is zero room for dissenters in parties led by individuals. When Nitish Kumar decided to snap a 17-year-old association with the BJP there was no objection. Bijoy Mohapatra and Dilip Ray helped Naveen Patnaik to found the Biju Janata Dal; they were dumped when the boss thought they were getting ideas above their station.

Dissent in dynastic parties is permitted but only to members of the ruling family.

The Thackeray cousins, Uddhav and Raj, split the Shiv Sena. M Karunanidhi's sons, Alagiri and Stalin, squabble over the DMK. Who knows what might happen to the Samajwadi Party if Mulayam Singh Yadav cannot keep the peace between Akhilesh Yadav and his many uncles? Or to the Nationalist Congress Party if Sharad Pawar cannot maintain the balance between his daughter, Supriya Sule, and his nephew, Ajit Pawar?

The point is that neither kind of party offers space for debate to the average member.

The two great exceptions are the BJP and the CPI-M, both ideological formations. (The CPI is too small to count.) But the two treat dissent quite differently.

The Marxists debate intensely, but differences of opinion are confined to the party. Communist discipline demands that everyone accepts a decision once it is reached. Anyone who voices dissent outside party fora -- an iconic K R Gowri Amma in 1994 or a rising star like Prasenjit Bose in 2012 is expelled.

The BJP does things differently. The debates are louder and more open. The difference is that dissenters are not automatically flung out of the party in the Marxist fashion.

The BJP's problem is that India is used to the despotism of the 'High Command' culture or the disciplined silence of the Communists; open disagreement is treated as a precursor to a split.

A second problem is that the BJP does not have any formal procedure for choosing leaders on the lines of American primaries.

Narendra Modi became the BJP's prime ministerial candidate in a raucous and messy process, but it was not -- this is the crucial point -- fundamentally undemocratic. By which I mean that Narendra Modi is definitely the choice of the average BJP member, probably also of BJP supporters in general.

L K Advani's reported opposition to Narendra Modi's elevation does not mean they won't work together. That was not true when Obama and Clinton battled it out for the Democratic leadership in 2008, nor when Tony Blair and Gordon Brown were rivals to lead the Labour Party in Britain in 1994.

Joining a political party is a matter of individual choice; most of us choose not to sign up even if we regularly vote for that party. So, you have to believe that two people have much in common when they spend their respective lives working for that party.

The ideological bonds between an L K Advani and a Narendra Modi are far stronger than anything that divides them.

It is equally wrong to say that the Rashtriya Swayamsevak Sangh forced the BJP to accept Narendra Modi. He is not exactly the RSS's favourite.

In the run-up to the 2012 Vidhan Sabha polls in Gujarat the RSS praised Modi's rival Keshubhai Patel, who had broken away from the BJP to found the Gujarat Parivartan Party. M G Vaidya, the RSS ideologue, criticised Modi on his own blog. See, for instance, the entry from November 11, 2012.

The RSS did not propose Narendra Modi's name for leadership as much as it conveyed the feelings of its own members.

Come the general election and I am sure that L K Advani and Narendra Modi shall work together. There are, however, a couple of lessons to be learned.

First, the BJP needs to consider a formal mechanism for choosing not just its prime ministerial candidate but also its nominees for Lok Sabha, Vidhan Sabha, or even municipal corporation polls. ('High Command' model parties won't even consider this, of course.)

Second, the media -- and Indians in general -- might ponder over a statement made by Narendra Modi in his now-famous 'puppy under the wheels' interview with Reuters. 'I always say the strength of democracy lies in criticism. If there is no criticism that means there is no democracy. And if you want to grow, you must invite criticism.'

Dissent is the heart of democracy, and we must learn to embrace open dissent without mistaking it for rebellion.

Image: BJP supporters at a felicitation ceremony for Narendra Modi in his assembly constituency, Maninagar, near Ahmedabad, after his victory in the Gujarat assembly election, December 21, 2012. Photograph: Amit Dave/Reuters.