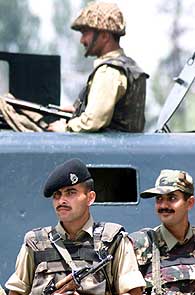 Kashmir is at a crossroads. The post-2006 transition from insurgency to peaceful protests now faces a serious threat, says Praful Bidwai after a recent visit to the valley.

The security bunkers that stood out like sore thumbs every 50 metres in Srinagar for two decades have gone. And the oppressive presence of uniformed men bearing weapons has become less overwhelming. But the shadow of Indian security forces still hangs heavy over the social, economic and political life of the Kashmir Valley.

During a brief visit to Srinagar, I discovered widespread popular alienation from the Indian State. For the Kashmiri people, the gun remains India's main face, and coercion or deception by New Delhi dominates their consciousness.

Sullen anger, discontent, hopelessness and despair lie beneath the calm and normalcy at the surface. The anger is intense among educated young people.

I wish I were wrong, but my discussions with separatist leaders from both factions of the All-Parties Hurriyat Conference, mainstream politicians, intellectuals, and above all, articulate young men and women, leave me with no other conclusion. Reading recent publications from the Valley only confirms this.

It is hard to predict what form the anger will take, and whether it will once again explode into militancy and secessionist violence, as in 1989. But Indian policymakers and the larger public would be dangerously mistaken in ignoring the simmering discontent in the Kashmir valley, or in imagining that it can be calmed or neutralised by incremental or token gestures like the announcement of yet another economic 'package'.

The popular alienation is the cumulative result of a number of factors culminating in Mohammed Afzal Guru's execution on February 9, and the widespread disgust this provoked in the valley.

Most Kashmiris believe, like many Indians, that Guru's trial did not establish his guilt.

Guru, Kashmiris believe, was killed for 'political' reasons -- because the United Progressive Alliance wanted to counter the Bharatiya Janata Party's charge that it is 'soft' on terrorists. They regard Guru's execution in secrecy as identical with that of Ajmal Kasab -- and hence proof that the Indian State equates Kashmir with Pakistan, an 'enemy' country.

They underline the contrast with the right to appeal granted to members of sandalwood smuggler Veerappan's gang and to Rajiv Gandhi's assassins, and believe Guru was singled out because he was a Kashmiri.

Other factors behind the alienation are innumerable human rights abuses, including the continuing detention of more than 1,000 young people for holding peaceful protests, despite the government's promise to pardon them; and use of the draconian Public Safety Act -- which allows detention without charges for two years -- against 12- and 15-year-old boys merely for pelting stones.

No less important is the disappearance of scores of people detained by the security forces, and many unpunished killings by the army, such as that of three boys at Machil in Kupwara district in 2010.

All this has strengthened resentment at what large numbers of Kashmiris consider as India's military occupation of the valley, which violates their freedom and dignity.

Compounding this is the ruling National Conference-Congress government's failure to address growing unemployment, prevalence of massive corruption, dilution of the Right to Information Act, and police brutality, reflected in the killing of more than 100 peaceful protesters in both 2008 and 2010.

Instead of redressing the situation, the state government has drafted the J&K Police Bill, which allows it to set up 'special security zones' in 'disturbed' areas, where the police acquire magisterial and administrative powers -- and impunity for their actions.

It also allows the creation of Salwa Judum-style militias in the form of 'village defence committees'. This has bred further resentment.

No less important is the exposure of the joint civilian-military Unified Command as a handmaiden of the army in 'security' matters. Chief Minister Omar Abdullah, backed by then Union home minister P Chidambaram, has repeatedly called for repeal of the Armed Forces Special Powers Act from certain peaceful areas, but the army has contemptuously vetoed that demand -- just as it sabotaged a settlement of the Siachen glacier dispute with Pakistan, favoured by New Delhi.

Army commanders have spoken on such policy issues in gross violation of the democratic principle that only the civilian leadership can do so. They even threatened to suspend counter-insurgency operations if AFSPA is repealed.

They strongly loath any dilution of their power under AFSPA to kill anyone merely suspected to be about to breach a prohibitory order such as Section 144 of the Criminal Procedure Code which bans the assembly of five or more persons.

This only proves, say Kashmiri analysts, that the Indian State has no respect for Jammu and Kashmir's elected government: Democracy is a 'mere showpiece' so far as Kashmir is concerned.

Irrespective of whether this perception is right or wrong, it is widely prevalent. An important element in it is the memory of repeated rigging of J&K assembly elections and imposition of Delhi's puppets on the state until recently.

A watershed was the 1987 election, the manipulation of whose results spontaneously provoked fierce anger, leading to the eruption of the separatist militancy in 1989, which Pakistan cynically exploited, to disastrous effect.

The militancy and ferocious State repression claimed more than 80,000 lives before they declined after 2002 thanks to popular exhaustion with violence. Things further changed with the 2004 Lok Sabha and the 2008 assembly elections, which saw relatively high polling such as 40 percent-plus.

In 2011, local body elections were held for the first time in a decade, which witnessed an impressive turnout of 79 percent despite the separatists' call to boycott them.

Since then, Kashmir's economy has expanded, tourism has boomed, and new enterprises have sprouted, including some in information technology, floriculture and banking. Kashmiris started taking and scored well in the all-India services examinations.

The number of Kashmiri students in Indian colleges has multiplied four-fold over a decade, according to one estimate.

However, this doesn't mean that full normalcy has returned or Kashmir's wounds have healed. Kashmiris have learnt to use the available democratic space without changing their fundamental stance vis-a-vis India.

There has been a transition from violent to peaceful protest, which became starkly visible in the 2008 Amarnath Yatra, and again in 2010. But popular alienation hasn't abated.

The Indian State's response to the protest was twofold: Shoot down peaceful agitators or arrest them on fake charges; and when the protests ebb, make conciliatory moves through committees such as the interlocutors group headed by journalist Dileep Padgaonkar.

This group is only the latest in a series of 'olive branch' offers by New Delhi, including visits by Rajesh Pilot and S B Chavan in the 1990s, the K C Pant committee of 2001, the N N Vohra committee of 2003, several rounds of talks with the separatists, numerous economic packages, and the prime minister's five J&K working groups set up with much fanfare in 2006. One of these, headed by present Vice-President Hamid Ansari, recommended revocation of AFSPA.

These initiatives may have temporarily calmed tempers in the valley and even averted a deeper crisis. But none of them produced results. Their recommendations either fell short of a solution, or were rejected outright. That was the fate of the interlocutors' report too.

Its story not only provokes derision, but worse, further cynicism in Kashmir and convinces people that the Indian government has no intention of changing course or reforming its J&K policy.

That was the message from the India-Pakistan back-channel talks too, based on General Pervez Musharraf's four-point formula. These very nearly succeeded in 2006-2007 and could have clinched a solution which involves demilitarisation, regional autonomy and self-rule without a redrawing of the borders.

But Prime Minister Manmohan Singh didn't seize the moment. Soon, Musharraf's position became untenable thanks to his confrontation with the judiciary. The moment passed.

To return to the present, Kashmir is at a crossroads. The post-2006 transition from insurgency to peaceful protests now faces a serious threat amidst the perception that New Delhi remains as unresponsive to these as it was hostile to the militancy.

There have been more than a dozen attacks on security forces by gunmen and suicide bombers, as well as armed encounters, in different parts of the valley in recent weeks.

These attacks were not led or coordinated by organised groups like Hizbul Mujahideen, but conducted by educated professionals -- engineers, science postgraduates and MBAs -- motivated by azaadi (freedom, autonomy, independence, nobody knows exactly which), and convinced that normal, peaceful, dignified life is impossible under Indian 'occupation'.

A majority of the young people I interviewed expressed sympathy for the attackers, while admitting that a heavy price would have to be paid for militancy and the State's retaliatory response.

Some even said that peaceful protest has exhausted its potential, and armed resistance may be necessary to highlight the cardinal truth that the Kashmir problem remains unresolved after 66 years.

These are dangerous signs. New Delhi must heed them and correct course -- even as it responds positively to Pakistan's new Prime Minister Nawaz Sharif's welcome offer of talks.