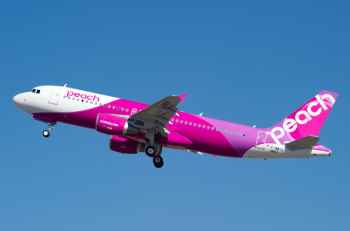 Fifty-nine people aboard a Japanese budget carrier had a lucky escape after the pilot "misunderstood" instructions from air traffic controllers and allowed the jet to fly just 75 meters above the sea while trying to land in Okinawa, authorities said on Tuesday.

Japan's transport ministry said a plane of Peach Aviation Ltd. dived to 75 meters above the sea in Okinawa Prefecture on Monday while trying to land at Naha airport after the pilot "misunderstood" instructions from the control tower.

None of the 53 passengers and six crew members aboard the Airbus A320-200 was injured as the aircraft turned upward to avoid a crash and landed safely after being alerted by a ground proximity warning system, the ministry said.

The 45-year-old Argentine captain of the plane, which headed for Naha from Ishigaki Island, a remote island in Okinawa, said he mistakenly believed the controllers had told the aircraft to descend as it approached the airport, Kyodo news agency quoted the ministry as saying.

The plane made a descent to the sea at around 7 kilometers north of the airport. Visibility is believed to have been low at that time due to rain.

The Japan Transport Safety Board is set to probe the incident by sending investigators to Kansai airport, where Peach Aviation is based.

The plane departed from Ishigaki Island at 11:02 am on Monday and landed at Naha at 12:10 pm after the warning system was activated at 11:47 am, according to the ministry.

An official of the land, infrastructure, transport and tourism ministry said the aircraft was in "a dangerous situation as it could have crashed into the sea."

"Peach will fully cooperate with Japan Transport Safety Board and take necessary measures for preventing similar cases," the airline said in a statement, noting that Japanese authorities have judged the incident as a "serious" one.

"Peach Aviation Limited extends its sincere apologies for any inconvenience and anxiety caused to customers onboard and parties concerned," the statement added.

Get Rediff News delivered into your Inbox.
Source: PTI© Copyright 2020 PTI. All rights reserved. Republication or redistribution of PTI content, including by framing or similar means, is expressly prohibited without the prior written consent.
Related News: Japan Transport Safety Board, Peach Aviation, Okinawa Prefecture, Ishigaki Island, Naha
SHARE THIS STORY
Print this article