By Aziz Haniffa
June 14, 2012 09:33 IST
After her meeting with External Affairs Minister S M Krishna, US Secretary of State said that Indo-US strategic partnership can be upped beyond 3.0 level that she had envisaged. Aziz Haniffa reports

At the end of her meeting with External Affairs Minister S M Krishna in Washington as part of the third United States-India strategic dialogue, US Secretary of State Hillary Clinton said she believed the US-India strategic partnership could be upped beyond the 3.0 level that she had envisaged three years ago.

She also declared in response to another question that recalled her describing the relationship between the two countries as an affair of the heart that it was only natural for such affairs of the heart to occasionally have its ups and downs.

Responding to a question that harked back to her first major speech on India to the US-India Business Council three years ago where she said it was the beginning of US-India 3.0 and if after the third US-India strategic dialogue she believed it was the beginning of US-India 4.0, Clinton said, "First of all, as to the strategic dialogue, we go from strength to strength. Because we believe strongly, and we have evidence to prove it, that our relationship is deepening and broadening."

She said, "The extraordinary work that has been done between the last strategic dialogue and today's on so many issues, which we will memorialise in our report and certainly make public, demonstrates the depth of cooperation between our two countries."

When another reporter also went down memory lane and spoke of how when she and Krishna stood at the same podium in the State Department's Treaty Room in 2010, and she had described the relationship "as an affair of the heart," but since then there had been various ups and downs with slow progress on the US-India nuclear deal, India's concerns about US protectionism not to mention the Iran question, Clinton quipped to peals of laughter, "With respect to affairs of the heart, they usually have ups and downs.   But that does not make them any less heartfelt or any less of a commitment."

"And so I feel as strongly today as I did two years ago.  And I think that it's always a temptation to zero in on what the differences are. That is understandable and it certainly is to be expected by the press.  That's part of your job," she said.

But Clinton said, "Whether it's one country or another or, in particular, India, I always look at the totality of the relationship.  And I would be never in a position to say we don't have differences."

"How could two great nations with our histories and our political systems -- these raucous, incredibly pluralistic democracies -- not have differences?  That would be quite odd if that were the case. But there is no doubt that our values and our interests are converging, that we have a view of this relationship that is in keeping with the perspectives and histories that bring us together in the 21st century where we are finding so much more common ground that we are working on together."

Thus, Clinton asserted, "I'm very positive about our relationship, and we will continue to work through the differences as they arise."

In her opening remarks, the she said, "Today, there is less need for dramatic breakthroughs that marked earlier phases in our relationship, but more need for steady, focused cooperation aimed at working through our differences and advancing the interests and values we share."

She acknowledged, "This kind of daily, weekly, monthly collaboration may not always be glamorous, but it is strategically significant.  And that is, after all, what this dialogue is all about."

Going down the laundry list of issues that constituted her discussions with Krishna and the Indian delegation, Clinton said, "On the economic front, we reviewed the progress that we've made together, and acknowledged there is still more room for growth, investment, and business ties."

In this regard, she noted, "We need to advance negotiations on a bilateral investment treaty, further reduce barriers to trade and investment in our two countries, create more hospitable environments for companies to do business."

On the US-India civilian nuclear front, Clinton pointed to the agreement signed on June 12 between Westinghouse and the Nuclear Power Corporation of India to speed construction of new power plants in Gujarat and help India meet its energy needs.

"I look forward to additional deals involving other leading American companies, including General Electric. And we will work together to ensure these projects are implemented to produce real benefits for citizens and businesses alike."

Clinton said the discussion had also "covered a number of serious concerns such as counterterrorism, cyber-security, and sustainable development.  We discussed cooperation in Afghanistan and the importance of working together with other partners to help build a peaceful and prosperous South Asia."

Specifically, where Afghanistan is concerned, she said, "Both the United States and India have signed strategic partnership agreements with Afghanistan to demonstrate our enduring commitment, and today we agreed to move forward with a formal trilateral consultation among our three nations."

Clinton said she had informed Krishna "how much we appreciate India's efforts in Afghanistan and the region and how much we are looking forward to the investment conference that India will host later this month in New Delhi."

She said Washington was also pleased with the burgeoning rapprochement between India and Pakistan "to open up avenues for trade, investment, and movement of people. And I applaud the leadership that Prime Minister Singh and Prime Minister Gilani have demonstrated."

Additionally, Clinton noted, "We paid particular attention to the future of the Asia Pacific region and our strong support for India's Look East Policy.  We will work together through key multilateral institutions such as the East Asia Summit and the ASEAN Regional Forum.  And the United States really welcomes India's support for our participation as dialogue partner in the Indian Ocean Rim Association for Regional Cooperation."

She also said, "We worked through some of the issues that we have fielded in common because of the concerns about Iran's continuing search for a nuclear weapon, and India has made it clear that -- Iran, like all countries, must live up to their international obligations and, as I reported to the Congress this week, India has taken steps to diversify its sources of imported crude by reducing purchases of Iranian oil."

"We recognise the important energy needs that India has, and we're working with India, not only to ensure stable oil markets, but to do more to open up other sources of energy for India," she said.

Clinton said that on all of these and other key issues, both countries "are working to convert common interests into common actions and we have to follow through."

But she reiterated, " I was very encouraged by what we heard today.  Things that don't make the headlines but are so critical, such as Wednesday's first ever higher education dialogue, making it easier for US and Indian researchers, students, faculty to take advantage of the educational resources and opportunities in both countries."

Clinton pointed out, "Our science and technology joint commission are working on improving our linkages in science and engineering and data sharing.  We have a new agreement signed in the health area to boost research on diabetes. And, for the first time, we agreed to share the US-India open government platform software that promotes transparency and accountability with a third country partner, Rwanda."

She said, "The list is very long and the minister (Krishna) and I will be making a comprehensive report -- he to the Prime Minister (Manmonhan Singh), I to the President (Barack Obama) -- of everything that's been happening in all of the various aspects of this incredibly important dialogue."
Aziz Haniffa in Washington DC
Related News: Hillary Clinton, Nuclear Power Corporation of India, US-India Business Council, US, M Krishna
Print this article 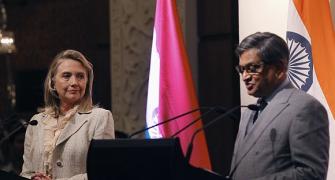 'India must walk the extra mile to boost ties with US' 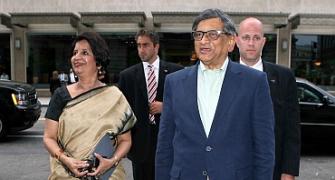 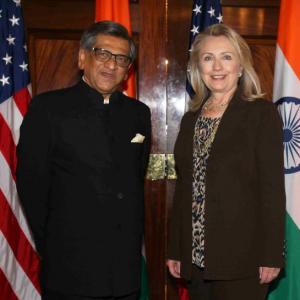