Claim of devotee can't be adverse to deity: SC in Ayodhya case

The Supreme Court on Friday told Nirmohi Akhara, which has said the lawsuit of 'Ram Lalla' be rejected and the disputed land in Ayodhya be given to it as it has been the deity's sole devotee, that the claim of 'shebait' (devotee) 'can never be adverse to the deity'.

Hearing the arguments on the 11th day, the top court said if the Hindu body was contesting the suit of 'Ram Lalla Virajman', it was going against the deity's title and asking the court to dismiss the suit of the deity.

On Thursday, the Akhara claimed it was the sole 'shebait' of Ram Lalla at the disputed site, prompting the court to say if it was so the Akhara cannot have the title over the 2.77-acre disputed land.

But the court's observation was resisted by the Akhara counsel, Sushil Jain, who said the Hindu body has been in possession of the property in the capacity of 'shebait' and hence its 'right does not vanish'.

On Friday, the five-judge Constitution bench headed by Chief Justice of India Ranjan Gogoi took exception to the Akhara counsel's statement, and said, "When you seek dismissal of the suit of your own deity then you are seeking right against your deity."

"Claim of the shebait can never be adverse to the deity. If you are contesting the suit (of Ram Lalla) then you are going against the title of the deity. So, as a shebait, you are asking to dismiss the suit of the deity," said the bench, comprising Justices S A Bobde, D Y Chandrachud, Ashok Bhushan and S A Nazeer.

"Suppose the suit of Ram Lalla goes then you have no independent claim... You can't survive if the deity does not survive."

Justice Bobde then asked the Akhara to clear whether it was taking a position 'contrary to the deity'. He told the counsel: "First say 'yes' or 'no'."

Jain explained to the court that the plea of the deity (Ram Lalla) was made in 1989 but the Akhara has been in possession of the place since 1934.

"I have taken a plea that decree in interest of deity can only be given in shebait's favour," he said.

The birth place of Lord Ram is not a 'juridical person' as claimed and the Akhara is entitled to take the plea, Jain asserted.

The bench said the Akhara has so far argued to contrary to the case built by it in the high court and asked Jain to refer to documents to 'build the case on merits'.

Jain said the Akhara was not claiming the title right of the property, but claiming its possession and the right to manage as a devotee.

"I am also seeking right to re-construct the Ram temple and I am not seeking any other right," he said, adding the other parties in the case should support the Akhara.

Jain said he was not denying the site was a 'wakf' property but 'wakf' can be a Hindu 'wakf' and the term only meant that a body which owns and manages religious properties.

The bench then asked: "You will have to show us the evidence to establish your 'shebait' rights. Show us the documents related to that. You show us documentary and oral evidence."

Jain said no other party has challenged Akhara's claim to shebaitship of the deity.

In response to a pointed query whether it had any documentary evidence in support of its right as 'shebait', Jain said, 'I have oral evidence (of witnesses) which has not been denied by others' and read out statements to indicate it had been managing the disputed site.

He also said the Akhara lost the records in a dacoity.

"It is not so... You have made a distinction between disputed temple and Ram Chabutra," the bench said.

On the submissions of the lawyer that the oral statements have not been properly recorded, the bench said, "These are not testimonies given in the witness box. They are affidavits which are prepared by proper application of mind".

Jain said the Akhara was 'poor' as it lost offerings including money after its possession over the outer courtyard of disputed structure in 1982 was taken away and then in 1992, the entire structure was demolished.

The bench would resume hearing on August 26.

14 appeals have been filed in the Supreme Court against the 2010 Allahabad high court judgment.

SC asks lawyer to be 'crisp', 'pin-pointed', 'precise' in arguments

The Supreme Court asked Jain to be 'pin-pointed' and 'precise' in his submissions.

"Mr (Sushil) Jain, we look forward to your pin-pointed, crisp and precise arguments," the bench said as soon as the senior counsel started advancing his submissions.

"While arguing, always keep in mind that we have already looked at large part of the documents," it told Jain.

On being told by the lawyer that a note was prepared and he would take around a week to conclude his arguments, the bench said, "You don't need a week, take a day and try your best to put forward the case."

The bench said it had perused many documents and asked Jain to supplement the arguments advanced by other Hindu parties.

Jain said the Akhara was very poor, it had no money and its temple was taken away, adding that the Hindu body was entitled to put forward its case.

"Mr Jain, still you have not started the submissions," the bench said, leading to commencement of arguments.

The top court asked the Uttar Pradesh government to look into the requests made by the Special Judge, Surendra Kumar Yadav, in his letter to the apex court considering the enormity of the work done by him.

A bench of Justices R F Nariman and Surya Kant asked the state government to file an affidavit within two weeks on the steps it considers appropriate.

"A letter has been written on July 27, 2019 by special judge Surendra Kumar Yadav, who is at present hearing the matter on day-to-day basis in which five requests have been made, which we think as reasonable.

"Considering the enormity the work done by him, we direct Uttar Pradesh government to look into the matter and file an affidavit clearly stating as what are the steps it considers appropriate," the bench said.

At the outset, senior advocate Aishwarya Bhati, appearing for Uttar Pradesh government told the bench that they need two weeks time to issue orders extending the tenure of the judge, who is set to retire on September 30.

She said that concurrence of the Allahabad high court and approval of the Finance Department has been taken and within two weeks the orders for extension of tenure will be issued.

The bench told Bhati that the needful orders should be issued within two weeks.

The top court also told Bhati that another letter written by the special judge has five-requests including providing him police protection.

Bhati said the state government will consider the requests and do the needful.

The bench posted the matter for further hearing after two weeks.

The apex court had on July 19 extended the special judge's tenure till the completion of trial and delivery of verdict in the case. However, the state government was yet to pass the order.

During the extended tenure, he will remain under the administrative control of the Allahabad High Court, the court had said.

The top court had held that Rajasthan Governor Kalyan Singh, during whose tenure as chief minister of Uttar Pradesh the disputed structure was razed, was entitled to immunity under the Constitution as long as he remains in gubernatorial position.

The court had termed the Allahabad high court's February 12, 2001 verdict dropping conspiracy charge against Advani and others as 'erroneous'. 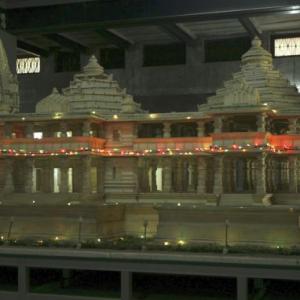