SC panel finds 'no substance' in harassment allegations against CJI

Chief Justice of India Ranjan Gogoi on Monday got a clean chit from the Supreme Court's In-House Inquiry Committee which 'has found no substance' in the allegations of sexual harassment levelled against him by a former woman employee of the apex court. 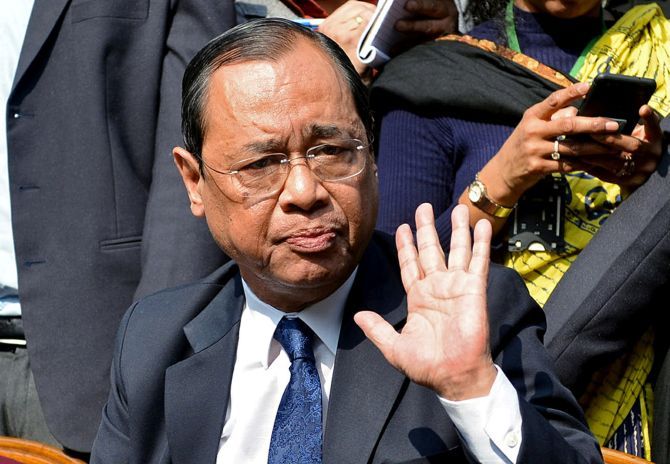 The 3-member Committee, which completed its task in 14 days, proceeded ex parte as the woman had opted out of the inquiry on April 30 after participating for three days.

She said that she will consult her lawyer and decide on the next steps.

A notice by the office of Supreme Court secretary general said the report of the Committee, headed by Justice S A Bobde, 'is not liable to be made public'.

The committee, also comprising two woman judges of the apex court -- Justices Indu Malhotra and Indira Banerjee -- had on May 1 recorded the statement of the CJI who had appeared before it.

'The In-House Committee has found no substance in the allegations contained in the complaint dated April 19, 2019 of a former employee of the Supreme Court of India.

'Please take note that in case of Indira Jaising vs Supreme Court of India and Anr (2003), it has been held that the report of a committee constituted as a part of the In-House Procedure is not liable to be made public,' the notice said.

It further said: 'The In House Committee has submitted its report dated May 5, 2019 in accordance with the In House Procedure, to the next senior judge competent to receive the report and also sent a copy to the judge concerned, namely, the CJI.'

After the CJI, Justice Bobde is the next senior most judge, followed by Justices N V Ramana, Arun Mishra and R F Nariman.

The findings of the panel were not submitted to Justice Ramana as he was part of the Committee when it was constituted but recused himself after the former woman employee, who is the complainant, expressed certain reservations over his inclusion.

After opting out of the Committee inquiry, she had issued a press statement describing as 'very frightening' the atmosphere of the panel and raised various objections including denial of her lawyer's presence.

On April 25, Justice Ramana recused himself after the complainant expressed her reservations over his inclusion on the ground that he is a close friend of the CJI and a regular visitor to his house.

In Justice Ramana's place, Justice Bobde had inducted Justice Malhotra as she had also alleged that the Committee was not formed in accordance with the Vishaka guidelines laid by the top court.

In a letter to Justice Bobde, the woman had said that as per the guidelines laid down by the Supreme Court in the Vishaka judgement, for holding inquiry into the allegations of sexual harassment at work place, the committee must have a majority of women.

Though there was no time frame to complete the inquiry, Justice Bobde had said the future course of action will depend on "what comes out of the inquiry" which will be 'confidential'.

Though the CJI had recused himself midway of the hearing, he had described the allegations against him as 'unbelievable' and had said a larger conspiracy was behind it and he would not stoop so low even to deny these allegations.

Later, a fresh bench comprising Justices Mishra, R F Nariman and Deepak Gupta was set up to hear the matter which appointed retired apex court judge, Justice A K Patnaik to inquire into the allegations of larger conspiracy to frame CJI Gogi and fixing of benches in the top court.

The allegation was made by a advocate Utsav Singh Bains who had filed an affidavit in this regard.

Hours before the information on the submission of the report became public, the apex court agreed to hear a plea seeking direction to the Central Bureau of Investigation to lodge a first information report into the alleged conspiracy to 'fix' Chief Justice of India.

The matter was mentioned for urgent listing before a bench comprising Justices S A Bobde and S A Nazeer by advocate M L Sharma, who claimed that there was a conspiracy to malign the CJI in a 'concocted, false sexual harassment' case.

"What is the urgency? You have filed it and it will come up for hearing," the bench said added, "It will be listed in due course," it added.

How the events unfolded

April 19: The former woman SC staffer sent a letter, along with affidavits, to 22 apex court judges giving details of the alleged harassment. She claimed that as a junior court assistant, employed with the Supreme Court between May 1, 2014 and December 21, 2018, she was harassed at the CJI's home.

April 20: An SC bench, headed by the CJI, holds a hearing on the allegations of sexual harassment and persecution. The CJI recuse himself midway.

April 22: Lawyer Utsav Singh Bains claims in the SC that there was a conspiracy to make the CJI resign by "framing him" in a false case of sexual harassment.

April 23: Justice S A Bobde, the senior-most judge of the Supreme Court, appointed to conduct an in-house inquiry into the allegations. Justices N V Ramana and Indira Banerjee are other members.

April 24: The complainant expresses reservations over presence of Justice Ramana in the inquiry panel on the ground that he is a close friend of the CJI.

April 25: SC constitutes one-man panel of former apex court judge Justice A K Patnaik to hold inquiry into allegations of larger conspiracy to frame the CJI. Clarifies one-man panel will not go into issue of sexual harassment allegations against CJI.

April 26: The woman appears before the in-house inquiry panel.

April 29: The woman appears before the in-house inquiry panel for the second time and records her statement.

April 30: She appears and later issues press statement that she is walking out of the proceedings of the panel.

May 5: The SC denies media report that Justices R F Nariman and D Y Chandrachud met Justice S A Bobde on inquiry into allegations against the CJI.

May 6: The in-house panel finds 'no substance' in allegations of sexual harassment against the CJI.

Ranjit Kumar Sinha
© Copyright 2021 PTI. All rights reserved. Republication or redistribution of PTI content, including by framing or similar means, is expressly prohibited without the prior written consent.