The Jammu and Kashmir administration has withdrawn restriction on movement of civilian traffic on the Srinagar-Baramulla stretch of the Jammu-Srinagar National Highway, an official said on Wednesday. The two-day-a-week restriction -- Wednesday and Sunday -- was put in place to facilitate movement of security forces' convoys.

"The restriction on civilian movement between Srinagar and Baramulla on the NH-44 will be completely lifted with effect from May 2, 2019. There will be no prohibition on civilian traffic on this stretch on Sunday or Wednesday," an official spokesman said.

However, he said the restriction will continue between Srinagar and Udhampur on the NH-44 as earlier.

The government had last month imposed restriction on civilian movement on the national highway connecting Jammu to Srinagar, in order to ensure adequate security to movement of security forces' convoys while at the same time minimising public inconvenience, the spokesman said.

These restriction became necessary following the large movement of security forces on an unprecedented scale after the Pulwama terror attack, he said.

These forces were required both for anti-militancy operations and for conducting general elections peacefully.

The government is monitoring the convoy needs of security forces on a real-time basis and making all attempts to minimise public inconvenience, the spokesman said.

"The restriction will be reviewed periodically and relaxation would be made as the need for restriction reduces," he added.

The spokesman said a complete review of the restriction on the highway would be done subsequently. 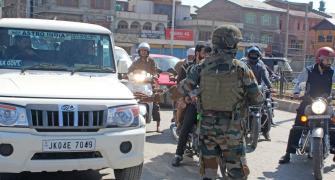