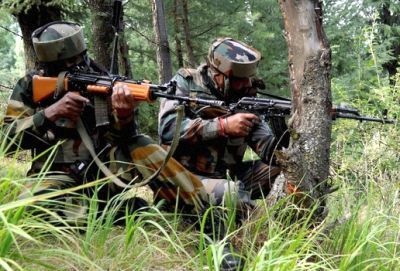 A civilian was killed in an exchange of fire between army personnel and terrorists in north Kashmir’s Kupwara district, a defence spokesperson said on Sunday.

Police said Asif Iqbal Bhat, a driver by profession and a resident of Thandipora, was injured in a firing incident in the Thandipora area of Kupwara on Saturday.

He was taken to the Kralpora sub district hospital, from where he was referred to a hospital in Srinagar where he succumbed to injuries, they said.

An FIR was registered at the Kralpora police station in connection with the incident and a probe was underway, a police spokesperson said.

The body was handed over to the family for last rites after completion of medico-legal formalities. The police and civil administration will provide all help to the bereaved family, he said.

Srinagar-based defence spokesperson Col Rajesh Kalia said Bhat was killed in an exchange of fire between army men and terrorists.

"Based on information about the presence of terrorists in Thindpura village, army laid ambushes in the area on the night December 16-17.

"Around 2255 hours, an ambush party noticed suspicious movement of three people near a nullah in the village. They were challenged by troops.

"The terrorists opened fire on the army ambush party. The troops retaliated. In the crossfire, one person, Asif Iqbal Bhat, was killed due to a gunshot wound," the defence spokesperson said.