Nalini Sriharan, one of the convicts who is serving a life imprisonment in connection with the assassination of former prime minister Rajiv Gandhi, on Thursday approached the Supreme Court seeking release from prison -- like fellow convict AG Perarivalan. 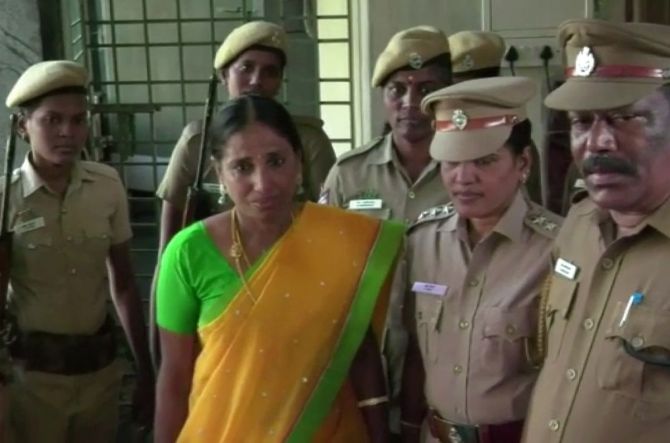 IMAGE: Rajiv Gandhi assassination convict Nalini being taken to the women's prison after the end of her parole, in Vellore, Tamil Nadu, September 15, 2019. Photograph: ANI Photo

Nalini has cited the judgment of the top court in the case of co-convict AG Perarivalan by which he was released.

Earlier, Nalini had knocked on the doors of the Madras high court seeking the same relief; however, the high court had refused to entertain her petition.

The Madras high court, while turning down her petition, had stated that it did not have special powers that the Supreme Court enjoys under Article 142 of the Constitution and hence, it cannot order her release as the Supreme Court did for Perarivalan in May 2022.

Earlier, P Ravichandran, another co-convict, also approached the top court seeking relief. Ravichandran, who has been in jail for 30 years now, sought interim bail until his case for formal release reaches a conclusion.

The high court had said they could approach the Supreme Court if their plea was based on Perarivalan's release.

On May 18, the Supreme Court had evoked its extraordinary powers under Article 142 of the Constitution to release AG Perarivalan, who was one of the seven convicts in the Rajiv Gandhi assassination case.

Following Perarivalan's release, Ravichandran had sent a letter to Chief Minister MK Stalin seeking the release of the remaining six convicts, including himself, and mentioned that the governor has kept the files of release without consideration for over three years, which he condemned as an anti-constitutional approach.

Deciding Perarivalan's plea for premature release from jail based on the recommendation made by the Tamil Nadu government in September 2018, the apex court had ordered his release in May 2022, while the six other convicts continue to remain in jail.

Ravichandran in his appeal against the high court order too cited Perarivalan's release order by the apex court.

Rajiv Gandhi was assassinated on the night of May 21, 1991, at Sriperumbudur in Tamil Nadu by a woman suicide bomber, identified as Dhanu, at an election rally.