Chinmayanand raped, physically exploited me for a year: UP student

The postgraduate student, who had levelled harassment charges against Swami Chinmayanand, on Monday alleged she was raped by the Bharatiya Janata Party leader who also physically exploited her for one year. 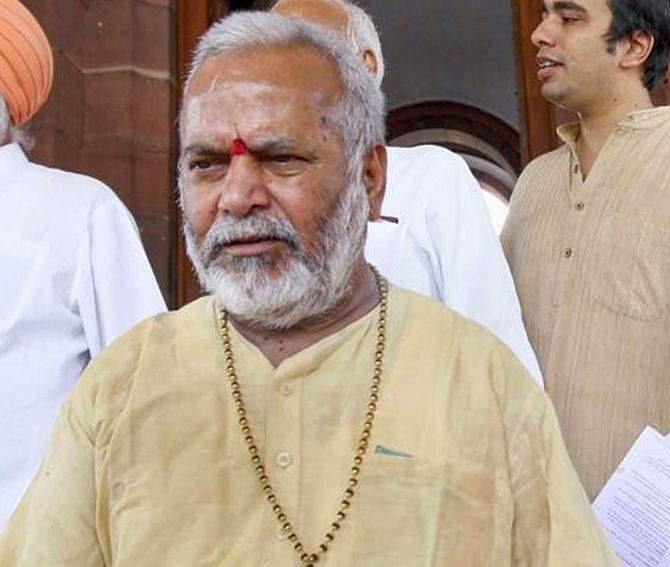 Addressing mediapersons in Shahjahanpur, she claimed that the Shahjahanpur police was not registering the rape case.

"Swami Chinmayanand raped me and even exploited me physically for one year," she alleged before mediapersons, her face covered with a black scarf.

The victim also approached the Delhi Police with a complaint accusing the BJP leader of raping her.

A senior Delhi Police official said they received a complaint at a police station in south district which has been forwaded to the special investigation team of the UP Police.

"The Delhi Police has registered this complaint at the Lodhi Road police station and has forwarded it to Shahjahanpur police, which is not registering the rape case,"she said.

"On Sunday, the SIT quizzed me for about 11 hours. I have told them about the rape. Even after telling them everything, they have not arrested Chinmayanand yet," she said.

She alleged that when her father gave a complaint to police here about her physical exploitation, Shahjahanpur District Magistrate Indra Vikram Singh "issued threats", asking her father to file "a missing complaint" instead.

"I have all the proofs. The hostel where I lived has been sealed. It should be opened in front of the media," she said, adding that she would give the proof, including video clips, at an opportune time against the 72-year-old BJP leader.

On the FIR registered by Chinmayanand's lawyer alleging that she was demanding Rs 5 crore, she said, "It should be probed. This is a fake allegation."

"He (Chinmayanand) has ruined lives of many girls. I can't tell the exact number. I am the only one to muster the courage and stand up," she added.

The SIT, headed by Inspector General Naveen Arora, was set up by the Uttar Pradesh government on a Supreme Court directive.

It is looking into the details of the probe conducted by the local police in the high-profile matter.

The SIT had called members of the girl's family at the district Police Lines on Sunday afternoon for recording their statement.

The team visited the residence of the BJP leader, his ashram and the college run by him where the victim studied.

It visited Divya Dham, the residence of Chinmayanand but could not meet him as he was out of town.

The team then visited Mukukshu Ashram of the BJP leader and toured the five colleges run by the ashram.

It also visited the residence of the woman but found it locked and returned.

The apex court had said that an Allahabad High Court bench would monitor the probe.

The inspector general said the report would be submitted to the Supreme Court in a sealed envelope after the inquiry.

The SIT was formed last Tuesday, a day after the Supreme Court took suo motu cognisance of the case and directed the state government to investigate the charges levelled by the student.

She had gone missing on August 24, a day after she posted a video on social media, alleging that a "senior leader of the sant community" was harassing and threatening to kill her.

She was located in Rajasthan last Friday.

Her father had filed a complaint with police, accusing 72-year-old Chinmayanand of sexually harassing her, a charge refuted by the former Union minister's lawyer who claimed it was a "conspiracy" to blackmail him.

Police had on August 27 booked Chinmayanand under Sections 364 (kidnapping or abducting in order to murder) and 506 (criminal intimidation) of the Indian Penal Code based on the her father's complaint.

The student had gone missing after levelling allegations against Chinmayanand in the video.

The apex court judges said she had raised certain grievances against the institution where she studied and her mother and father had some apprehensions about the safety of their children.

The Shahjahanpur police had on August 27 lodged an FIR against Chinmayanand after the student went missing.