Sri Lanka's Hambantota Port authorities said the high-tech Chinese research vessel that was to dock there on Thursday won't reach the port as scheduled, according to a media report, days after India expressed security concerns over its presence in the island nation. 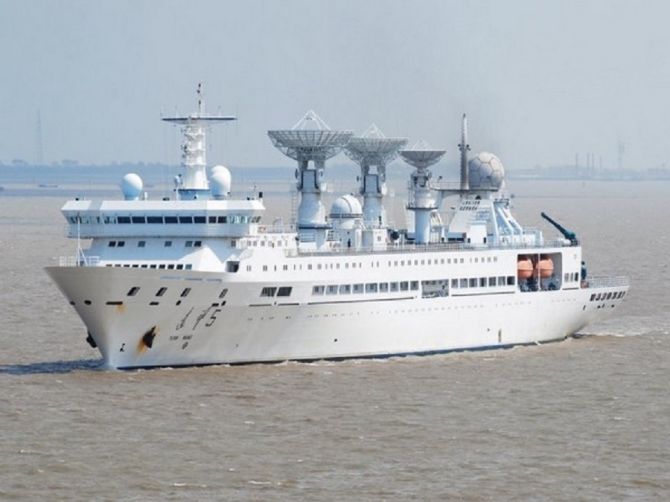 The harbour master for the Hambantota port says no vessel can enter the port without his permission, the newsfirst.lk website reported.

Last week, the Sri Lankan foreign ministry had asked Beijing to defer the arrival of Yuan Wang 5, which was scheduled to dock at the Hambantota port from August 11 to 17 due to security concerns expressed by India.

However, there was no announcement on whether or not the vessel will be allowed to enter the Hambantota port.

Yuan Wang 5 left China on July 14 and till now it has not entered a single port along its route. The vessel has been sailing for approximately 28 days with zero replenishment.

On July 12, the Sri Lankan foreign ministry had granted approval for the vessel's docking at the Hambantota port. On August 8, the ministry in a letter to the Chinese embassy in Colombo requested the deferring of the planned docking of the ship. It, however, did not specify the reason for such a request. Yuan Wang 5 had already entered the Indian Ocean by that time.

The southern deep-sea port of Hambantota is considered strategically important for its location. The port has been developed largely with Chinese loans.

As of Thursday evening, Yuan Wang 5 was approximately 600 nautical miles away from the southern port of Hambantota in Sri Lankan waters, the newsfirst.lk report said. The vessel is now facing the Bay of Bengal from the east of Sri Lanka.

In 2021, a Chinese government survey ship -- Xiang Yang Hong 03 -- was operating in the same region in the Indian Ocean and carrying out a search pattern west of Sumatra.

"The government carefully monitors any development having a bearing on India's security and economic interests and takes all necessary measures to safeguard them," he said last month.

Ties between India and Sri Lanka came under strain after Colombo gave permission to a Chinese nuclear-powered submarine to dock in one of its ports in 2014.

India's concerns have been focused on Hambantota port in particular. In 2017, Colombo leased the southern port to China Merchant Port Holdings for 99 years, after Sri Lanka was unable to keep its loan repayment commitments, fanning fears over the potential use of the port for military purposes.

China is the main creditor of Sri Lanka with investment in infrastructure. Debt restructuring of Chinese loans would be key to the island's success in the ongoing talks with the International Monetary Fund for a bailout.

India, on the other hand, has been Sri Lanka's lifeline in the ongoing economic crisis. It has been at the forefront of extending economic assistance of nearly USD 4 billion to Sri Lanka during the year as the island nation is grappling with the worst economic crisis since independence in 1948.