The Chinese soldier who was apprehended by Indian troops near the Demchok area was found to be carrying a sleeping bag, storage device and a mobile phone. 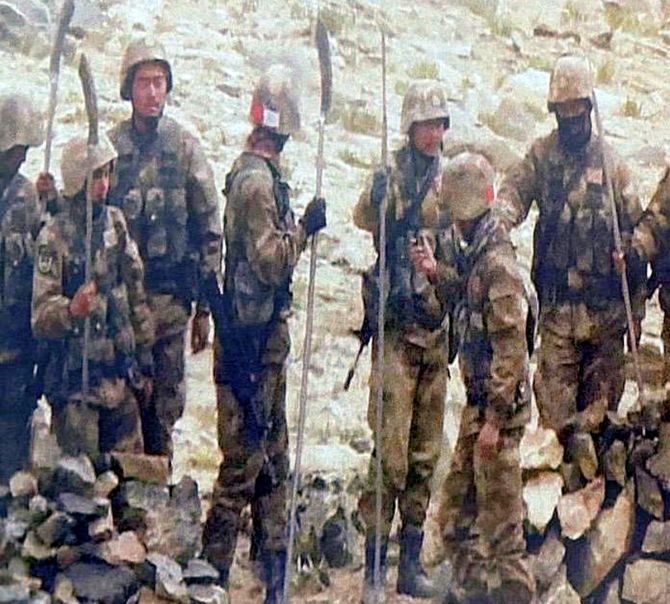 IMAGE: Chinese PLA soldiers armed with stick-machetes during their deployment along the Line of Actual Control in eastern Ladakh. Photograph: ANI Photo

The soldier named Corporal Wang Ya Long had strayed across the Line of Actual Control into Indian territory in the Demchok area in eastern Ladakh and was apprehended by the Indian Army on Monday.

"The Chinese soldier was found carrying a sleeping bag, an empty data storage device and a mobile phone along with his military identity card by when he was apprehended by our security forces," government sources said.

He was thoroughly checked and questioned by the military authorities concerned as per the established protocols before being handed over to the Chinese at a long Border Personnel Meeting at Chushul meeting hut, they said.

In a statement about the incident, the army had stated that the Chinese soldier was "provided medical assistance including oxygen, food and warm clothes to protect him from the vagaries of extreme altitude and harsh climatic conditions".

The Indian Army said a request had been received from the PLA on the whereabouts of the missing soldier.

It said he would be returned "as per established protocols" after formalities were completed.

He was later returned to China on Tuesday night.

Following the handing over of the PLA soldier to China, Chinese newspaper Global Times reported that the Indian army's decision was viewed as a positive sign ahead of the eighth round of military talks.

The incident came amid a massive deployment of troops by the two armies in the region following the border standoff.

Both Indian and Chinese armies have deployed over 50,000 troops each along the LAC in Eastern Ladakh including in the Demchok sector following escalation of the five-month-long military standoff that began in early May.

The two sides have so far held seven rounds of high-level military talks on the border faceoff. The seventh round of talks was held on October 12.

There was no breakthrough on the disengagement of troops from the friction points so far.

This round was held with a specific agenda of exploring ways to implement a five-point agreement reached between External Affairs Minister S Jaishankar and his Chinese counterpart Wang Yi at a meeting in Moscow on September 10 on the sidelines of a Shanghai Cooperation Organisation conclave.