"Deepest condolence for the passing away of India's greatest communist and China's great friend, comrade Jyoti Basu," the Consul General of China in Kolkata Mao Siwei wrote in the condolence book at the Communist Party of India (Marxist) headquarters in Kolkata at Alimuddin Street on Monday.

The body of Basu, who died at a private hospital on Sunday, has been kept at Peace Haven, a funeral parlour.

West Bengal Assembly Speaker H A Halim also paid his tribute to Basu on Monday saying the late leader had faced more difficult times than Bidhan Chandra Roy, who is described as the architect of modern Bengal.

"B C Roy was indeed a tall leader, but Basu faced more difficult times. Basu tackled the situation in 1984 when Sikhs were attacked after Indira Gandhi's assassination and the riots following the Babri Masjid demolition. B C Roy did not face such a situation," Halim told journalists.

Basu, he said, was a thinker and initiated fundamental changes in rural and semi-rural areas. He was also responsible for land reforms, the Panchayati Raj system and for making education free.

Basu had also fought for setting up the Haldia Petrochemicals Ltd and Bakreswar Super thermal power station, he said.

Describing Basu as one of the best parliamentarians in the country, the speaker said both as an opposition leader and as chief minister his behaviour was exemplary.

"He used to address me as Mr Speaker sir although I was much junior to him. He was a bhadralok (gentleman) Communist. He never misbehaved with any opposition member even after criticism. He gave proper respect to the opposition," 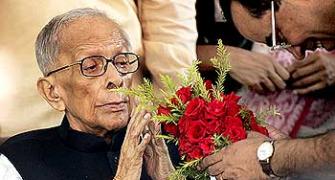 Basu, a record setter in many ways
'Basu, one of the last few bhadrolok politicians'
'The country mourns the death of a patriot'

'Jyoti Basu was the great PM India never had' 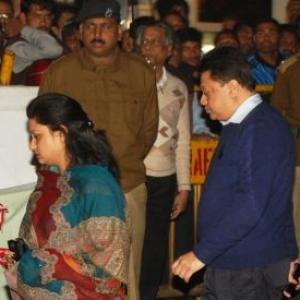 'Jyoti Basu's life was a tragedy'