Describing China as a "pacing challenge" to the United States, Defence Secretary Llyod Austin has told American lawmakers that Beijing's "aggressive behaviour" in the Indo-Pacific could spark a "crisis" in the strategically vital region. 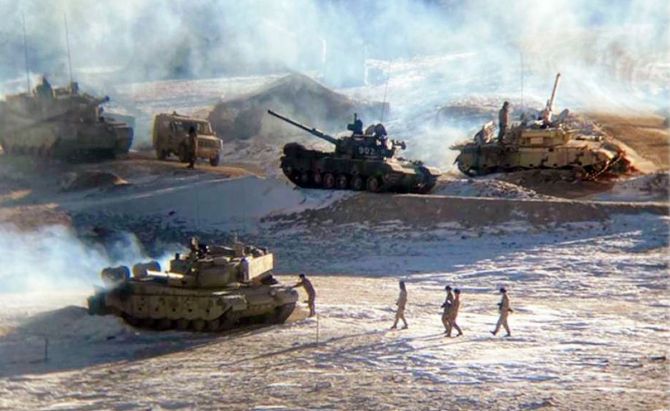 Responding to questions from members of the Senate Armed Services Committee during a Congressional hearing on the annual budget of the Pentagon, he stressed on having a direct line of communication between the militaries and also between government officials of the two countries.

"As we look at some of the aggressive behaviour that we have witnessed from China in the Indo-Pacific, I'm concerned about something that could happen that could spark a crisis," Austin told the lawmakers on Thursday.

"We need the ability to be able to talk with our allies and partners and also with our adversaries or potential adversaries. So, I think there needs to be a direct line of communication between the military and also between government officials as well," the defence secretary said.

Austin described the US' relationship with China currently as one of competition.

"They desire to be the preeminent country on the planet. Their mid to long-term goal is to do that. They look to compete with us, not only militarily but across a spectrum of activity," he said.

"What you see us doing, the military and other sectors in our government, is making sure that we remain competitive, economically; making sure that we continue to develop the best scientists in the world and the most comprehensive research. So it is a competition across a broad spectrum of activity," Austin said.

China has urged the US not to treat it as an "imaginary enemy".

A senior Chinese foreign ministry official this week said in Beijing that China is committed to developing a relationship of non-conflict, non-confrontation, mutual respect and win-win cooperation with the US but will continue to firmly safeguard China's sovereignty, security and development interests at the same time.

China has impeded commercial activity like fishing or mineral exploration by countries like Vietnam and the Philippines.

US naval ships regularly sail through the disputed South China Sea in a bid to assert freedom of navigation in the region which is also vital for shipping.

On Wednesday, Austin issued directives to the Department of Defence to better address the security challenges posed by China as America's number one pacing challenge.

These initiatives -- some of which will remain classified -- are designed to focus departmental processes and procedures and better help department leaders contribute to whole-of-government efforts to address the challenge from China, officials said.

These directives, based on the final recommendations of the Department's China Task Force, were developed in consultation and coordination with interagency partners and will complement the multi-faceted work on China policy of departments, agencies, and the White House, the Pentagon said.

"It's concerning to me that we don't seem to have an effective hotline with China. I understand the Chinese are reluctant about this, but I believe this should be a national security priority," King said.

Austin described China as a "pacing challenge" for the United States.

"China is our pacing challenge. So we've really weighted our main effort there to the Indo-Pacific region. My first trip overseas was out to the region, along with Secretary of State Antony Blinken. We visited South Korea, Japan and India as well," the defence secretary said.

"We truly value the importance of strong relationships with our allies and partners. I think there's a great capacity that can be leveraged there. So, in some areas through those partnerships, while still strong, we will remain focused on that," he said.

General Mark Milley, the Chairman of the Joint Chiefs of Staff, said that from a military standpoint, China is the number one threat for the US.

Russia is a considerable great power competitor as well, he noted.

"The most significant military threat that we're focused on is China. It's our pacing challenge. That's what we have asked you a number of times to help us resource our efforts on that challenge," he told the lawmakers.