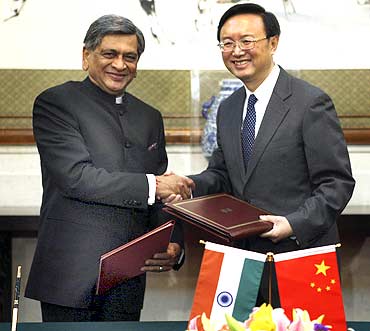 India on Wednesday inked an agreement with China to set up a hotline between Prime Ministers of the two countries as it conveyed its serious concerns to the Chinese leadership over Beijing's issuance of stapled visas to Kashmiris and plans to undertake projects in Pakistan occupied Kashmir.

The establishment of the hotline showed how close India and China were with each other, External Affairs Minister S M Krishna said, wrapping up his four-day visit in Beijing during which he held wide-ranging talks with Premier Wen Jiabao and his counterpart Yang Jiechi.

Briefing the media on Krishna's meetings in Beijing, Foreign Secretary Nirupama Rao said he strongly conveyed India's concern over China stapling visas for residents of Jammu and Kashmir, during his meeting with Yang.

"We do not accept the stapled visas on the passports of residents from Jammu and Kashmir. Our position in this regard was again made clear during the talks. They (the Chinese side) listened attentively what we said. We underlined the need for more sensitivity to be shown to Indian concerns in this regard. This is a subject of ongoing discussion with China. That is where it stands at the moment," she said.

On Krishna's assertion that China should support India's aspiration to become a permanent member of the United Nations Security Council, she said 'the issue was raised with Premier Wen by the Minister.'

"The Chinese position in this regard was as encapsulated in the joint statement issued after Prime Minster (Manmohan) Singh's visit to China in 2008," Rao said.

The 2008 joint statement had said China attached 'great importance' to India's position as a major developing country in international affairs.

"The Chinese side understands and supports India's aspirations to play a greater role in the United Nations, including in the Security Council," it had said.

On China undertaking development projects in Pakistan-occupied Kashmir, Rao said "Yes, the matter was raised. Our concerns were conveyed."

"The Chinese side was given the full picture of why we feel this way about their activity in Pakistan-occupied Kashmir (PoK)," she said.

The Chinese stand was that the Kashmir issue between India and Pakistan should be resolved through bilateral dialogue in a peaceful way.

"What they (China) do in PoK is without prejudice to their position on PoK," Rao said.

She said Krishna also raised the issue of the detention of 21 diamond merchants from Gujarat by China on charges of smuggling and emphasised that the legal process should be conducted in a transparent manner.

Rao said the Chinese side promised to continue to provide access to the Indian officials to the detainees. It also agreed to allow the family members of the detained persons to meet them between April 7 and 9.

On the boundary question, Rao said both sides agreed that the mechanism established with the Special Representatives to resolve the issue yielded progress as they worked out guiding principles and political parameters that can form the framework for boundary settlement.

"Both sides understand that it is a complex issue. It needs patience to solve it. There is a political will to move forward and narrow down the differences on it and to seek peaceful negotiated settlement to this outstanding issue. While these efforts are on, peace and tranquillity on the boundary should be maintained," she said.

Krishna also conveyed India's concerns over the reports of construction of dams on Brahmaputra river. The Chinese side informed India that only projects to generate hydropower were taken up, but there was no move to divert the water, Rao said.

Asked about reports of Chinese hackers attacking some of the sensitive Indian defence websites, she said, "We did not discuss this issue."

"We are concerned about such reports and there is every need to be alert to such threats. Cyber security is of paramount importance. We need to take necessary steps to safeguard our assets."

Krishna also inaugurated the 'Festival of India' in China in connection with the 60th anniversary of establishment of bilateral diplomatic ties. On the agreement to set up the hotline, Krishna told reporters that 'this has been one of the highlights of my visit and it is fitting that the two countries were able to do it during the celebrations of 60th year of establishment of diplomatic relations.'

The External Affairs Minister held two rounds of talks with Yang during which with they inked the agreement to set up hotline between the PMO's of both countries to step up interaction at the top level the leadership.

The establishment of hotline would enable Prime Minister Singh and his Chinese counterpart Wen Jiabao to hold direct conversations. The decision to set up the hotline was reached during a meeting between Singh and Chinese President Hu Jintao in the Russian city of Yekaterinburg in June 2009 After his talks with Krishna, Yang said 'we have had very good discussions covering broad range of issues. We all believe that the relationship has to be approached from a strategic vantage point and from long-term interest.'