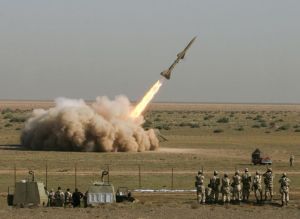 China on Tuesday said it has successfully tested a new guided missile in the Bohai Sea near the tense Korean peninsula to raise the operational capability of its armed forces and "effectively respond to threats" to national security.

The People's Liberation Army Rocket (Missile) Force tested the new missile in the Bohai based on annual training programme, the defence ministry said in a brief statement.

The missile was designed to "raise operational capability" of the armed forces to "effectively respond to threats" to national security, it said, adding that the test had "achieved an expected result."

However, the statement did not specify when the missile was tested. It just said the test was carried out recently.

The ministry has not released any further information about the missile, state-run CGTN reported.

The Bohai Sea is a body of water off the coasts of Tianjin municipality, Shandong, Hebei and Liaoning provinces.

The test was carried amid China's vociferous protests over US deployment of THAAD interceptor missiles in South Korea, whose powerful radars could see through most part of China including its missile development programme.

THAAD's deployment in South Korea has infuriated China, which fears it will weaken its own ballistic missile capabilities and says it upsets the regional security balance.

The THAAD system is designed to intercept and destroy short and medium-range ballistic missiles during their final phase of flight.

The US said the THAAD deployment was aimed at countering any missile attack by North Korea against South Korea, Japan and US itself.

China also said its troops carried out exercises close the North Korean border as US President Donald Trump stepped up pressure on the North Korean leader Kim-Jong-un to scale back the nuclear and missile programme.

China, an acknowledged missile power, has several short, medium and long range missiles. Its Dong Feng 31 (DF-31) is the longest with a range of 11,700 kms.

In 2015, China for the first time demonstrated a whole range of long, medium and short range missiles during a military parade. It included Dongfeng-21D missile, the anti-ship ballistic missile described as the "carrier killer".

It had caused concern among US defence officials as it reportedly has the ability to blow up aircraft carriers from a distance of about 1,500 km to 1,700 kms.