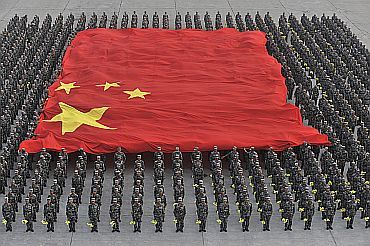 China on Wednesday said that it was willing to play a "constructive role" in improving relations between India and Pakistan, especially after the increased hostility along the LoC, saying the situation in Kashmir has attracted "international" attention.

Chinese foreign ministry spokesman Geng Shuang said India and Pakistan are important South Asian countries but the "situation in Kashmir has attracted the attention of the international community."

India has maintained that the Kashmir issue is a bilateral matter with Pakistan, and that there is no scope for a third party mediation.

The Chinese comments on Kashmir aimed at getting involved in Indo-Pak tensions come at a time the armies of India and China are locked in a standoff in Doklam area in the Sikkim section.

Beijing has previously refrained from commenting on the situation in Kashmir, saying the dispute was a "leftover from history" and should be resolved by India and Pakistan.

Expressing concern over the tension between India and Pakistan, Geng said "the conflict occurred near the Line of Control of Kashmir. This will not only harm the peace and stability of the two countries but also the peace and tranquillity of the region."

"We hope the relevant sides can do more things that are conducive for peace and stability in the region and avoiding escalating the tensions and China is willing to play constructive role in improving relations between India and Pakistan," he told reporters.

The rare Chinese comments on the Kashmir issue also come two days after a Chinese analyst wrote in the state-run Global Times that a "third country's" Army could enter Kashmir at Pakistan's request, using the "logic" the Indian Army used to stop the Chinese military from constructing the road in Doklam area.

Geng's comments were in reply to a question on the tension between India and Pakistan, Organisation of Islamic Cooperation expressing concern over the situation in Kashmir, and whether China can play role to defuse the hostility between the two countries.

According to Pakistan Foreign Ministry, the OIC Council of Foreign Ministers, who met in Abidjan, Republic of Cote d'Ivoire, passed a resolution on Kashmir.

Indian security forces have been carrying out combing operations in parts of Kashmir to clear the areas of militants supported by Pakistan who launch attacks against them.

On Monday evening, militants targeted a bus carrying Amarnath pilgrims and killed seven of them, including six women, in Kashmir's Anantnag district. Lashkar-e-Taiba commander and Pakistani national Abu Ismail has emerged as the mastermind of the audacious attack.

China claimed that the Sikkim standoff is "different" from the previous border frictions along the Line of Actual Control as it has taken place at a "defined section" of the boundary.

Chinese Foreign Ministry spokesman Geng Shuang, while reacting to Foreign Secretary S Jaishankar's remarks that the two countries will be able to handle the Sikkim standoff as they have dealt with such border differences in the past, said China has pointed out many times that the Indian border troops "illegally trespassed" a mutually recognised border line.

"This is different from the frictions that happened in the undefined sections of the border region," Geng told reporters.

Reacting to Geng's remarks, official sources in New Delhi said the principles on which the differences between the two countries on the border issues and tri-junctions are addressed are mutually agreed upon and well established.

Geng's remarks come amid a standoff between the militaries of India and China in the Doklam area in the Sikkim sector, where Indian troops stopped road construction by Chinese soldiers.

The Sikkim section has a special historical background and this is the only defined boundary between China and India, Geng said.

"This is totally different from the undefined boundary in the east, the middle and the western part. According to the 1890 convention, the Sikkim section has been defined and both China and India have recognised this," he said, reiterating Beijing's stand.

"This convention is effective for both the countries. And we once again require India to withdraw the border troops to the Indian side of the boundary and properly settle this dispute at an early date," Geng said.

Delivering a lecture in Singapore, Jaishankar on Tuesday said that India and China have handled their border issues in the past and there was no reason why they will not be able to deal with them this time.

"It is a long border, as you know no part of the border has been agreed upon on the ground. It is likely that from time to time there are differences," Jaishankar said while responding to questions on the Sikkim standoff.

He also said differences should not become disputes.

India had earlier asserted that it is "deeply concerned" at the recent Chinese actions and has conveyed to the Chinese government that the road construction would represent a significant change of status quo with serious security implications for it.

Source: PTI© Copyright 2021 PTI. All rights reserved. Republication or redistribution of PTI content, including by framing or similar means, is expressly prohibited without the prior written consent.
Related News: Line of Control, Geng Shuang, Pakistan, India, Sikkim
SHARE THIS STORY
Print this article 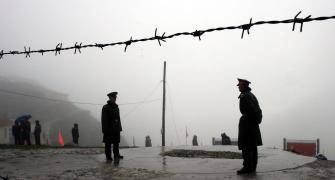