China reported 78 new confirmed cases, including 74 imported infections, while the death toll from the novel coronavirus increased to 3,277 after seven more fatalities were confirmed from the COVID-19, health officials said on Tuesday. 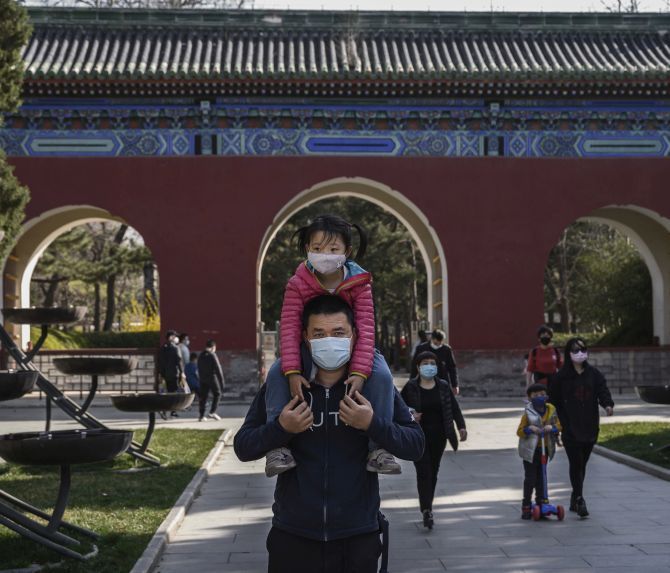 IMAGE: A Chinese man and his daughter wear protective masks as they walk at Ritan Park in Beijing, China. Officials believe the worst appears to be over in China, though there are concerns of another wave of infections as the government attempts to reboot the world's second largest economy. Photograph: Kevin Frayer/Getty Images

The overall confirmed cases on the Chinese mainland have reached 81,171 by the end of Monday. This included 3,277 people who died of the disease, 4,735 patients who were still being treated and 73,159 patients discharged after recovery, the National Health Commission said on Tuesday.

The NHC said, 78 new confirmed COVID-19 cases were reported on the Chinese mainland on Monday, of which 74 were imported from abroad taking the number of overseas cases to 427.

Also on Monday, seven deaths and 35 new suspected cases were reported on the mainland with all the deaths in Hubei Province.

The total COVID-19 cases in Beijing climbed to 522 with eight deaths prompting local governments of Beijing as well as Shanghai to announce that all overseas arrivals will be subjected to nucleic acid tests to ensure proper detection.

Of the 74 newly imported cases, 31 were reported in Beijing, 14 in Guangdong, nine in Shanghai, five in Fujian, four in Tianjin, three in Jiangsu, two in Zhejiang and Sichuan respectively, and one in Shanxi,
Liaoning, Shandong and Chongqing respectively, the NHC said.

Beijing is already diverting all international flights to different cities where the passengers will be quarantined for 14 days before arriving in the city.

The NHC said 132 people were still suspected of being infected with the virus.

Coronavirus epicentre Wuhan has reported one confirmed case after a gap of five days prompting officials to begin to ease restrictions.

Wuhan also reported seven new deaths, bringing the total number of deaths in the city and Hubei province for which Wuhan is the capital to 3,160.

The province also saw 444 patients discharged from hospital after recovery on Monday. Among the 4,200 patients being treated in hospital, 1,203 were still in severe condition and another 336 in critical condition, the local health commission said.

By the end of Monday, 356 confirmed cases, including four deaths have been reported in Hong Kong, which has restricted the entry of foreigners into the city. Also a total of 25 confirmed cases were reported in Macao and 195 in Taiwan including two deaths, state-run Xinhua news agency reporrted.

After days of decline in coronavirus cases, China on Monday said that COVID-19 has effectively been "stemmed" in the country and it started easing severe restrictions imposed on Wuhan's 11 million people who were under lockdown since January 23.

The authorities began relaxing restrictions in Wuhan as it reported no new case for the fifth consecutive day on Monday.

Significantly, the Central Leading Group, headed by Premier Li Keqiang which is coordinating efforts to contain the virus since January 23, said the virus has been curtailed in the country as well as in Wuhan.

"The meeting noted that the spread of the virus nationwide, particularly in the epicentre of Wuhan, has been effectively stemmed," an official statement said on Monday.

The meeting, however, warned that the risks for sporadic infections and localised outbreaks have not gone away. With the pandemic rampaging across the world, the situation remains complex and challenging.

"Wuhan city and Hubei province should stay focused on medical treatment and community-level containment as the two key priorities. They should continue to treat the severe cases, promptly admit new cases, and advance epidemiological investigations," the meeting said.

In Wuhan, officials said people are allowed to go back to work while restrictions on the public transport are gradually being eased.

The Hubei province and its capital Wuhan with over 56 million people were under lockdown since January 23. The vicious virus broke out in city, reportedly at a live animal market in December last year and became virulent inflicting thousands of people in the city and province catching the government off guard.

As the country saw a surge in imported infections, the Chinese government announced that all international flights scheduled to arrive in Beijing will be redirected to airports in 12 other Chinese cities from Monday.

International passengers flying to Beijing will instead land at airports in 12 cities including Shanghai, Tianjin, Nanjing and Shenyang as their first points of entry, the Civil Aviation Administration of China said in a statement.

On Monday, China said international travellers should "think twice" about choosing Beijing for flight transfer in view of the restrictions.

Starting from Monday, all international flights scheduled to arrive in Beijing will be redirected to airports in 12 other Chinese cities, Liu Haitao, an official with China's National Immigration Administration said.

Passengers would go through entry procedures and quarantine measures at the designated cities' airports before they continue their flights to Beijing, Liu said, urging travellers to reserve enough time for their next flights to make sure that they do not miss their outbound flights.