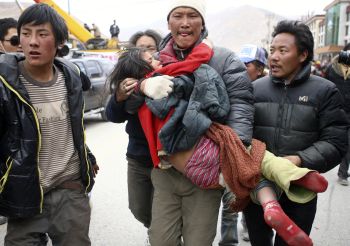 Chinese rescuers raced against time to save hundreds of people buried under the rubble three days after the devastating earthquake flattened the remote Tibetan dominated Qinghai province as the toll mounted to 800.

Premier Wen Jiabao, who has put off his foreign tour, personally led rescue teams goading them not to give up efforts to save lives as 300 people are still listed missing after the 7.1 magnitude killer quake hit the region.

"I want to reiterate that peoples lives comes first as long as the slightest hope exists, we will give 100 percent and never give up especially the first 72 hours of the earthquake," Wen said.

The relief turned out to be a major challenge for the well-oiled Chinese government machinery as the Tibetan Autonomous Prefecture of Yushu, located adjacent to Tibet.

The region is predominantly inhabited by Tibetans and officials have to press in scores of interpreters to speak to the public who spoke only Tibetan language and not Mandarin.

"The central government shares your pain, your loss is our loss, your relatives are our relatives, your disaster is our disaster and we mourn together," Wen told people.

President Hu Jintao too has cut short his tour to Brazil where he attended the Brazil-Russia-India-China summit on Friday and headed home cancelling his rest of the Latin American tour to Venezuela and Chile.

Reports from the quake hit areas meanwhile painted a poignant picture as relatives cried, monks prayed, and rescuers clapped especially when a teenage girl was rescued out alive this afternoon after nearly three days under the flattened ruins of a hotel in quake-stricken west China.

The 13-year-old was immediately carried away to a medical centre in Gyegu town as delighted rescuers congratulated each other. At least 791 people were dead, 11,486 were injured, and 294 were missing.

Thousands of rescuers taking part in the rescue efforts were also affected by the high altitude, thin air, freezing temperatures and electricity shortages are hampering their efforts, Xinhua news-agency reported.

At least two-dozen trained rescuers had stood down due to altitude sickness, said police and military sources participating in the rescue.

The tremor flattened 15,000 residential buildings in Gyegu town near the epicentre and many people are believed to still be trapped under the rubble, rescuers said.

Image: An ethnic Tibetan carries a 13-year-old Tibetan girl who had been buried in the ruins of a collapsed hotel for more than 50 hours after a strong earthquake in Yushu | Photograph: Donald Chan/Reuters