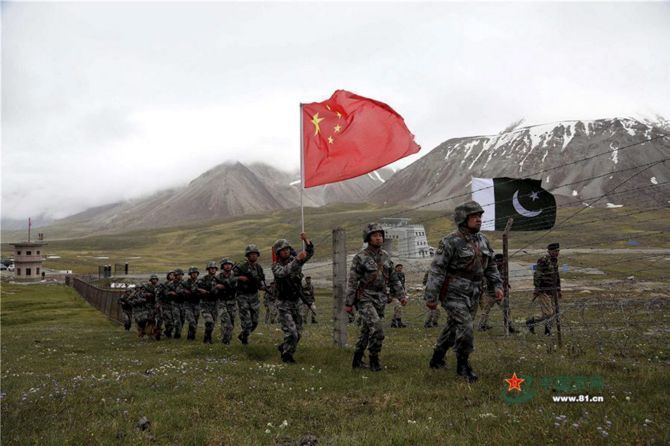 Chinese and Pakistan border troops have for the first time launched joint patrolling of the border connecting Pakistan occupied Kashmir with Xinjiang province amid reports that over 100 Uighurs have fled the restive region to join the Islamic State.

The state media reported about the joint patrol even as Chinese President Xi Jinping asked the Chinese Muslims to practice their religion ‘as part of Chinese society and direction’.

The People’s Daily Online on Thursday published a dozen photos with a caption ‘the frontier defence regiment of the People’s Liberation Army in Xinjiang, along with a border police force from Pakistan, carry out a joint patrol along the China-Pakistan border’.

The photos show teams of armed troops from both sides conducting foot patrols in a number of areas.

This is the first time China-Pakistan began joint patrols in recent years though Chinese troops have been conducting patrols in the area since 2014.

Though there is no write-up to provide details of the joint patrolling and what prompted both the countries to launch it, it coincides with reports of over 100 Uighur Muslims sneaking out of Xinjiang to join the IS.

United States think-tank New America Foundation on Wednesday said tough religious restrictions on Muslim minorities in China’s far west may have driven 114 Uighurs to join the IS but found that the recruits had no prior experience with jihad, raising questions about China's official narrative of radicalization in Xinjiang by the East Turkistan Islamic Movement.

Uighurs are a predominantly Muslim Turkic-speaking ethnic group who hail from Xinjiang and China in the past has stated that a number of militants from the community who fought in Syria were caught after their return to cause violent attacks in the volatile province, which bore the brunt of the militancy reportedly carried out by the ETIM.

The New America Foundation in its report said banning and or strictly controlled the observance of certain Muslim practices, such as growing beards and fasting during Ramzan has led many to join the IS.

The separatist militant group ETIM in the past is reported to have training bases in Pakistan’s tribal areas and subsequently, Pakistan military under pressure from China carried out massive air and ground operations to clear the Uighur militants’ bases.

Currently, the work is underway for the China-Pakistan Economic Corridor which connects both the countries through highways, rail, optic cable network and pipelines.

Once the $46 billion (Rs 3 lakh crore) project is complete, Xinjiang will get linked to Pakistan’s Gwadar port.