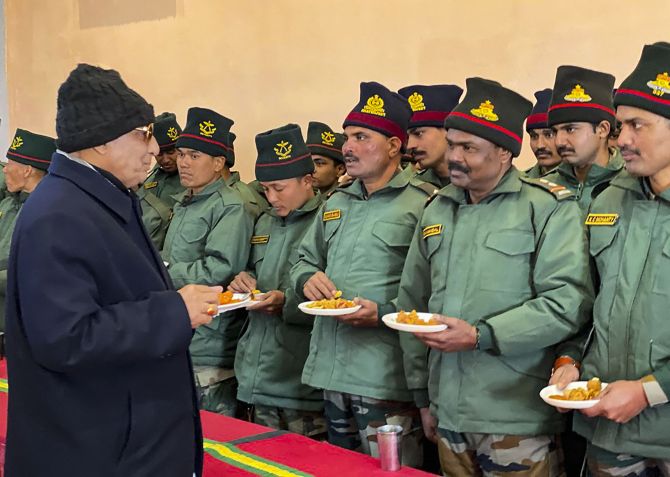 China on Friday objected to the visit of Defence Minister Rajnath Singh to Arunachal Pradesh, saying the Chinese government never acknowledged the 'so-called' northeast Indian state, which it claims to be a part of South Tibet.

Singh visited Tawang on Thursday for the 'Maitree Diwas' celebrations to boost civil-military friendship in the region bordering China.

"We firmly oppose the activities conducted in that area by Indian officials or leaders," Geng said.

"We urge the Indian side to respect Chinese interests and concerns, and stop taking any actions that may complicate the boundary matter and take real actions to safeguard peace and tranquillity in the border areas," he said.

China claims Arunachal Pradesh as part of South Tibet and the two countries have so far held 21 rounds of talks to resolve the border dispute covering 3,488-km-long Line of Actual Control (LAC). 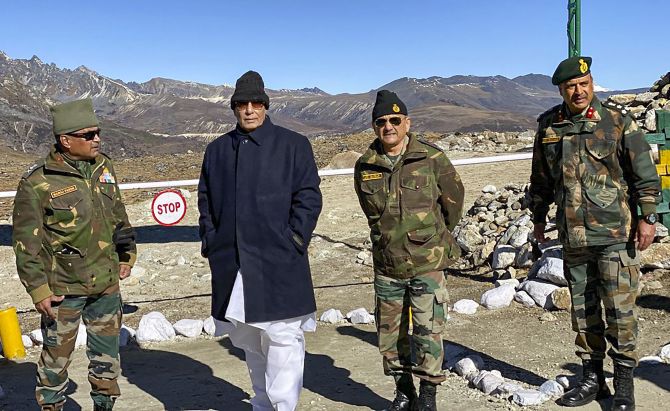 India says Arunachal Pradesh is its integral and inalienable part and Indian leaders visit the state from time to time, as they visit other parts of the country.

Addressing a function in the border town of Tawang, Singh said people living there are important to the country strategically.

He described the people living on borders as no ordinary citizens but India's 'strategic assets' and said the road to a 'new India' as envisaged by Prime Minister Narendra Modi runs through a 'new North-East'.

The government is working on a north-east industrial corridor to develop Arunachal Pradesh as a land bridge for South East Asia, he said.

IMAGES: Defence Minister Rajnath Singh interacts with jawans of the Indian Army during his visit to forward areas in Bumla near Tawang, Arunachal Pradesh, on Friday. Photographs: Twitter/PTI Photo
K J M Varma
© Copyright 2020 PTI. All rights reserved. Republication or redistribution of PTI content, including by framing or similar means, is expressly prohibited without the prior written consent.