The P-8I, which is widely acknowledged to be the world's most deadly LRMR-ASW aircraft, is a derivative of the Boeing 737-800 airliner, onto which a plethora of sensors and weaponry has been fitted.
Ajai Shukla reports. 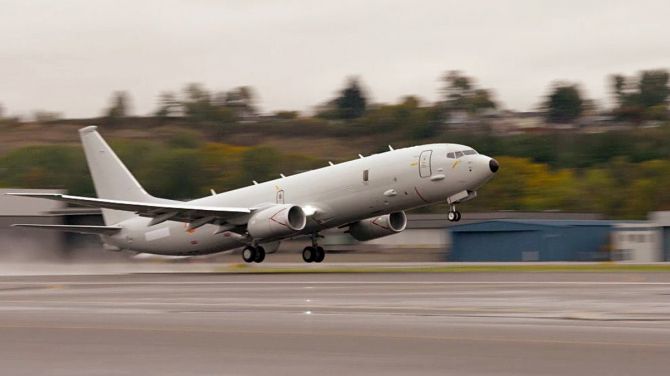 The Indian Navy's ability to detect and destroy enemy submarines has been given a substantial boost with the Boeing ompany delivering the eleventh of 12 P-8I Poseidon long-range maritime reconnaissance and anti-submarine warfare (LRMR-ASW) aircraft ordered by India.

Since the first P-8I Poseidon was inducted into the Indian Navy in 2013 and during the 30,000 flight hours that the Poseidon fleet has logged since then, the aircraft has become the cutting-edge of India's ASW arsenal.

The P-8I, which is widely acknowledged to be the world's most deadly LRMR-ASW aircraft, is a derivative of the Boeing 737-800 airliner, onto which a plethora of sensors and weaponry has been fitted.

It has Raytheon multi-mode radar to detect aircraft, surface ships, and submarines, while another belly-mounted radar looks backwards like an electronic rear-view mirror. A 'magnetic anomaly detector' on the P-8I's tail detects submarines from the magnetic field that large masses of metal (such as submarine hulls) create.

Hostile submarines, once detected, are required to be destroyed. The on-board Harpoon missiles and Mark 54 torpedoes do that. Alternatively, the targets are 'handed on' digitally to friendly warships, or submarines, which finish the job.

The Indian Navy became the first international customer for the P-8I in January 2009 when it signed a contract with Boeing for eight aircraft for $2.17 billion, according to a Comptroller and Auditor General report.

In 2016, the Indian Navy signed a follow-on contract, under the 'options' clause in the first contract, for four additional P-8I aircraft.

With just one more P-8I aircraft left to be delivered, the Indian Navy has been grappling with the question of whether to order more of these lethal aircraft.

Today, India operates the largest Poseidon fleet outside the US. Besides the Indian Navy, the P-8 is operated only by the three AUKUS (Australia, the UK, and the US) countries: The Royal Australian Air Force, the British Royal Air Force and the US Navy.

During several bilateral and multilateral naval exercises with these countries -- such as Exercise Malabar last month -- Indian P-8I crews have developed joint drills and communication protocols with their counterparts that enable them to take swift and lethal action against warships and submarines from hostile countries.

This interoperability has been greatly enhanced by the conclusion of agreements such as th Communications Compatibility and Security Agreement and the Basic Exchange and Cooperation Agreement for geospatial co-operation with the US.

In exercises such as Malabar, as in a war with China, the P-8Is will play a crucial role in tracking any Chinese attempt to move their navy from their bases in the South China Sea into the Indian Ocean.

To forestall this, the Indian Navy's P-8Is would patrol and mount surveillance over four major Southeast Asian straits -- Malacca, Lombok, Sunda and Ombai-Wetar.

Boeing says its integrated logistics support package has enabled the P-8I fleet to remain at a high state of readiness at the lowest possible cost.

Boeing is completing construction of a training support and data handling centre at INS Rajali -- the home base for the P-8Is at Arakkonam in Tamil Nadu.

A secondary centre is coming up in Kochi at the Naval Institute of Aeronautical Technology, as part of a training-and-support package contract signed in 2019.

Over the years, Boeing has strengthened its supply chain in India, sourcing around $1 billion worth of equipment annually from more than 275 partners, who employ over 10,000 workers.

This includes a joint venture with Tata Group to manufacture fuselages for Apache helicopters.

In addition to unmatched maritime reconnaissance and anti-submarine warfare capabilities, the P-8I has been deployed to assist during disaster relief and humanitarian missions.

Chief of Naval Staff Admiral Karambir Singh has stated that the maritime aircraft was also used in Ladakh, during the ongoing stand-off with the Chinese.