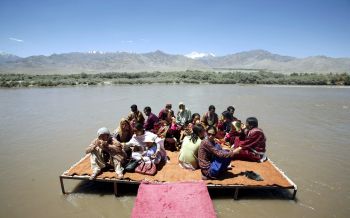 Army officials in Leh were a part of a meeting convened by the Jammu and Kashmir government that agreed that China was encroaching into the land with "specific design" to grab a particular area to extend its control till Indus river.

During the meeting chaired by Commissioner (Leh) A K Sahu and attended by Brigadier General Staff of 14 Corps Brig Sarat Chand and Colonel Indraj Singh, it was also agreed that all agencies must take "coordinated and effective measure to destroy the Chinese design and save our territory."

Army Chief General Deepak Kapoor, however, has recently dismissed the allegation that Indian land had shrunk along the Line of Actual Control.

The Army chief had raised this issue during a Unified Command meeting earlier this week in Jammu and Kashmir as well but state Chief Secretary S S Kapoor made it clear to him that the state establishment did not agree with the Army's perception.

Other state officials present at the meeting said there was evidence suggesting that the Indian land had shrunk with China in the Himalayan town.

Originating in the Tibetan plateau in the vicinity of Lake Mansarovar in Tibet Autonomous Region, the river runs a course through the Ladakh district of Jammu and Kashmir, then enters Northern Areas (Gilgit-Baltistan) and later merges with the Arabian Sea near the port city of Karachi in Sindh.

The Dokbug area is the same place where "Rebos" (nomads) take their cattle during this period for grazing. In December 2008 and early last year, the nomads were driven out from the area by People's Liberation Army of China.

"The meeting decided that no such things would be allowed to happen in future and the morale of the nomads would be boosted through appropriate interventions from our side," the report said.

The meeting, which was attended by officials from the Jammu and Kashmir government, Ministry of Home Affairs and Army, "also felt the need for strengthening the patrolling."

Last year, Chinese troops had entered nearly 1.5 km into the Indian territory on July 31 near Mount Gya, recognised as International border by India and China, and painted boulders and rocks with "China" and "Chin9" in red spray paint.

The 22,420 ft Mount Gya, also known as "fair princess of snow" by Army, is located at the tri-junction of Ladakh in Jammu and Kashmir, Spiti in Himachal Pradesh, and Tibet. Its boundary was marked during the British era and regarded as International border by the two countries.

Before this, Chinese helicopters had violated Indian air space on June 21 along the Line of Actual Control in Chumar region and also heli-dropped some expired food.

Image: People sit on a platform floating on the Indus River during the 'Sindhu Darshan' festival in Leh | Photograph: Amit Gupta / Reuters