China likely to be focus of Modi, Abe defence talks 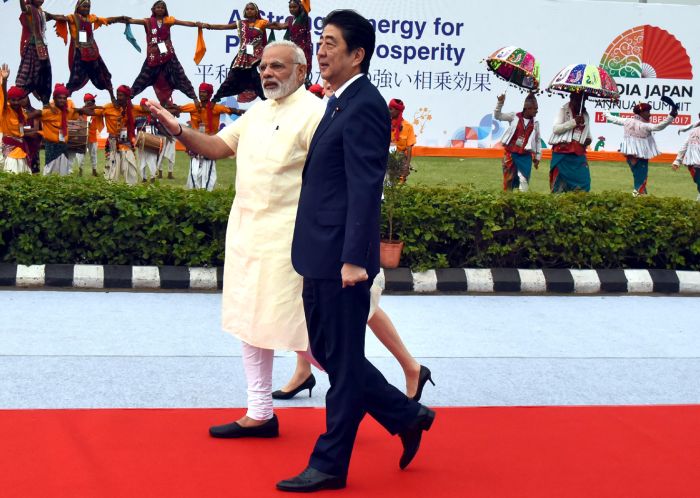 Prime Minister Narendra Modi and his Japanese counterpart Shinzo Abe are likely to deliberate extensively on bolstering defence and security ties during the annual summit talks being held in Gandhinagar on Thursday in the backdrop of China's growing assertiveness in the region.

There may be specific discussions on the long-pending Indian proposal to buy the US-2 amphibious aircraft from Japan and joint development of military equipment to further deepen the defence ties in sync with strategic partnership between the two countries, official sources said.

The annual Indo-Japan summit is taking place amid escalating tension in the region following the nuclear test by North Korea and China's combative posturing in the resource-rich South China Sea, and Modi and Abe are expected to deliberate on them.

The two prime ministers may also explore ways to further deepen ties between the navies of the two countries to check China's heightened activities in the Indian Ocean.

Reflecting growing congruence in ties, Japan had thrown its weight behind India during the Doklam standoff.

Ahead of Abe's visit here, the India-Japan annual defence ministerial dialogue had taken place in Tokyo during which co-production of military equipment, dual use technologies and New Delhi's proposal to buy the US-2 ShinMaywa aircraft were discussed.

Last year, China had reacted angrily to reports that Japan plans to sell weapons to India at cheaper prices, saying that such a move was disgraceful.

There are indications that the joint statement by the two countries after Modi-Abe talks will have certain components relating to defence cooperation.

At the defence dialogue, the two sides had also agreed to commence technical discussions for research collaboration in the areas of Unmanned Ground Vehicles and Robotics.

Modi and Abe are expected to deliberate on cooperation in the nuclear energy sector as well.

A landmark civil nuclear deal between the two countries providing for collaboration between their industries in the field had come into force in July.

The deal allows Japan to export nuclear technology to India, making it the first non-NPT signatory to have such a deal with Tokyo

There was political resistance in Japan -- the only country to suffer atomic bombings during the World War II -- against a nuclear deal with India, particularly after the disaster at the Fukushima nuclear power plant in 2011.

Japan is a major player in the nuclear energy market and an atomic deal with it will make it easier for US-based nuclear plant makers Westinghouse Electric Corporation and GE Energy Inc to set up atomic plants in India as both these conglomerates have Japanese investments.

Source: PTI© Copyright 2020 PTI. All rights reserved. Republication or redistribution of PTI content, including by framing or similar means, is expressly prohibited without the prior written consent.
Related News: Narendra Modi, Shinzo Abe, Press Information Bureau of India, Japan, US-2
SHARE THIS STORY
Print this article 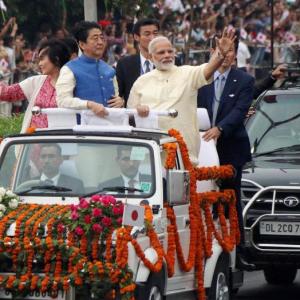