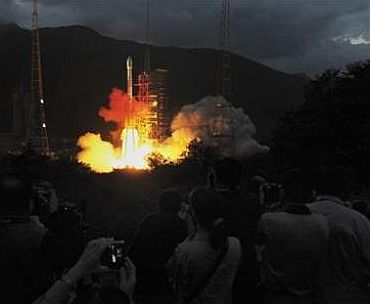 As part of its ambitious plans to put a man on the moon, China on Friday launched its second unmanned lunar probe to test soft-landing technologies for another mission slated for 2013, the same year when India plans to launch Chandrayaan-II.

After a text book launch of the probe 'Chang'e II' around 4.30 pm IST on the country's 61st National Day, the rocket successfully placed the lunar orbiter in its intended orbit in 20 minutes, prompting the scientists at the launch centre to break into loud cheers.

The Chinese satellite was launched by a 54.84-metre Long March 3C rocket, weighing about 345 tonnes from Xichang Satellite Launch Centre in Sichuan Province in a nationally televised event.

The rocket carried Chang'e II, named after Chinese mythical moon goddess, to a trans-lunar orbit, which has an apogee of about 380,000 kilometres from the earth. The satellite is expected to take about 112 hours, or nearly five days, to arrive at its lunar orbit.

Chang'e II was expected to orbit 100 km above the moon, compared with 200 km of its predecessor Chang'e I, the first lunar probe launched by China in 2007. The probe ended its 16-month mission in 2009, when it crashed into the moon's surface.

"Chang'e-II was expected to be faster and reach lunar orbit within five days, compared to 13 days, 14 hours and 19 minutes for Chang'e-1," Ouyang Ziyuan, chief scientist at the China Lunar Exploration Project, was quoted as saying by the official Xinhua news agency.

"China has not been to moon before the country launched Chang'e-1, so we were very prudent at that time and adjusted its orbit in a very slow manner. We can send Chang'e-II directly to the moon and we have also changed the orbit for it, so it can reach lunar orbit within five days," Ouyang said.

In addition, Chang'e-II will orbit 100 km closer to the moon and carry a higher resolution camera.

Chief designer of the satellite, Huang Jiangchuan, said that unlike Chang'e I, Chang'e II would be directly carried to the lunar orbit by the rocket, so a large amount of fuel would be left after its mission, enabling it to do more work.

The first scenario for it was to stay in the lunar orbit and continue to transfer data back to the earth for further research before eventually landing on the moon as an experiment for future lunar probes.

In the second scenario, Chang'e II would leave the Earth-Moon system, flying into outer space to test China's capability to probe further into space.

The third would be a "homecoming," altering its orbit to become an earth orbiter, the designer said, adding that its future would be decided on the basis of its performance in the designated mission and its condition when the mission is completed.

The lunar probe will test key technologies and collect data for future landings of Chang'e III and Chang'e IV and provide high-resolution photographs of the landing area.

According to China's three-phase moon exploration road map, the country will first launch the Chang'e-II lunar orbiter. Then it will land Chang'e-III on the moon in 2013.

The first manned moon mission was expected to be in 2025.

Chang'e-II will test key soft-landing technologies for the Chang'e-III and provide high-resolution photographs of the landing area.

Two hours before the launch, several thousand people who were staying in the surrounding areas were evacuated for safety reasons. Special ships were positioned to track the Chang'e-II.

With Chang'e-II, China is poised to make giant strides into deep space exploration. It recently announced its plans to send first manned mission to moon by 2025, a probe to Mars by 2013 and to Venus by 2015, besides setting up its own manned space station.

Ouyang said China's plans to launch an orbital space station by 2020 is achievable, based on aerospace technology development and the success of future manned missions.

China earlier had a headstart by flying a man into space in 2003, thus becoming the third nation only after the US and the then Soviet Union.

India, whose Chandrayan-1 had discovered water on the moon, plans to launch its Chandrayan-II mission in 2012-13.