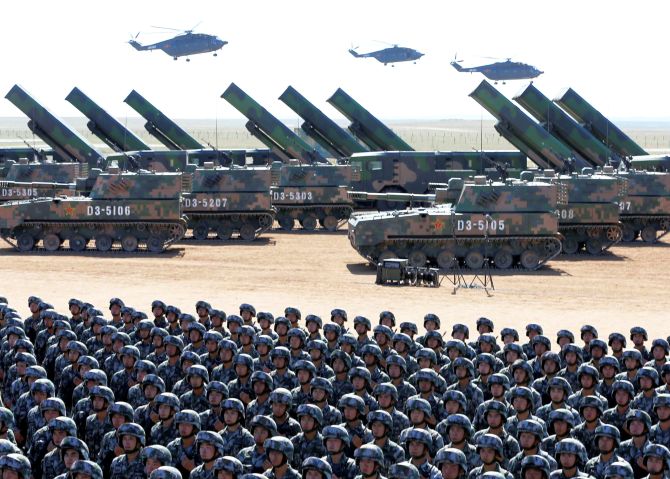 IMAGE: Soldiers of China's People's Liberation Army  take part in a military parade to commemorate the 90th anniversary of the foundation of the army at the Zhurihe military training base in Inner Mongolia Autonomous Region, China on July 30, 2017. Photograph: Reuters

China on Monday announced a 8.1 per cent hike in its defence expenditure for this year to a whopping USD 175 billion, which is over three times higher than India's defence budget, as it seeks to further advance an ambitious modernisation drive for its military.

The 8.1% increase is higher than last year's announcement, when China upped military spending by 7% over the previous year.

According to a budget report to be submitted to the National People's Congress, the 2018 defence budget will be 1.11 trillion yuan (USD 175 billion).

China is the second largest spender on defence after the United States.

China's budget announcement comes as President Xi Jinping, the commander in chief of the country's armed forces, focuses on increasing both the sophistication and reach of the country's military.

Though China announced its military spending at about USD 150.5 billion last year, observers say it is considerably higher, considering it is now building two more aircraft carriers in addition to the one already in service as well as addition of new jet fighters, including stealth fighter J-20.

The Chinese Navy also expanded its global reach with flotilla ships sailing through the far-off oceans to expand China's influence.

The official media justified the increase to USD 175 billion, saying although slightly higher than the previous two years, the growth rate is the third time to dip into the single digit since 2013, following 7.6 per cent in 2016 and 7 per cent in 2017.

China's defence budget takes up a smaller share of its gross domestic product (GDP) and national fiscal expenditure compared with other major countries, Zhang Yesui, the spokesperson of the NPC told the media in Beijing on Sunday.

Its military spending per capita is also lower than other major countries, Zhang said.

"A large part of the growth of the defence budget is to make up for the low military spending in the past and is mainly used to upgrade equipment and improve the welfare of servicemen and women and the living and training conditions of grassroots troops," he said.