Striking an aggressive stance at the face-to-face talks with the US, China on Monday for the first time handed down to Washington a list of demands and remedial actions to be taken by the Biden administration to end the "stalemate" in bilateral ties. 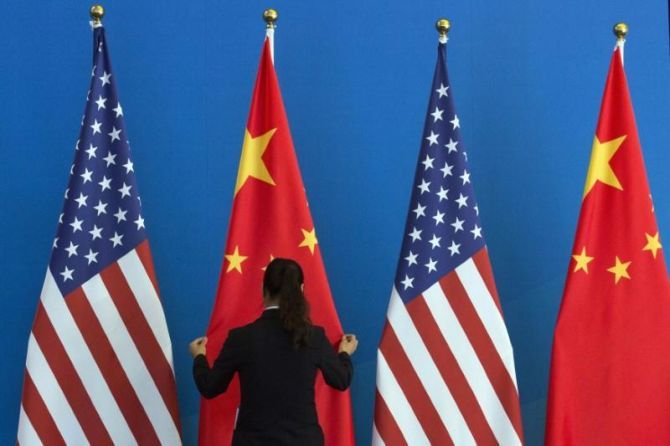 Talks between Chinese Vice Foreign Minister Xie Feng and US Deputy Secretary of State Wendy Sherman to improve the relations got off on a rough note at the northeastern Chinese port city of Tianjin, with Xie launching a blistering attack on Washington, accusing it of being the "owner of coercive diplomacy".

Sherman, the No. 2 diplomat of the US, is the highest-ranking American official to visit China since President Joe Biden took office six months ago.

She started her meetings with Xie, who is in-charge of the US-China relations, and is due to hold talks with Chinese Foreign Minister Wang Yi at a resort hotel in Tianjin.

Besides launching a well-publicised scathing attack on the US, accusing it of "bullying" other countries with "might is right" coercive diplomacy by imposing sanctions, Xie also handed down a "List of US Wrongdoings that Must Stop" and a "List of Key Individual Cases that China Has Concerns".

The list included removal of US sanctions imposed on the Chinese officials and their families and revocation of the Washington's judicial request to Canada to extradite Meng Wanzhou, CFO of Huawei and daughter of its founder Ren Zhengfei, Chinese Foreign Ministry spokesman Zhao Lijian told a media briefing in Beijing.

Meng, who was arrested in Vancouver in 2018 on a bank fraud warrant issued by the previous Trump administration, is still facing trial.

In the list of wrongdoings, China urged the US to revoke the visa restrictions on members of the ruling Communist Party of China and their families unconditionally, revoke the sanctions on Chinese leaders, officials and government agencies, cancel visa restrictions on Chinese students and stop harassing them, stop suppressing Chinese companies and “oppression” Confucius institutes, he said.

In the second list, China has expressed concern over rejection of visas for Chinese students, the unfair treatment of Chinese citizens and harassment of the Chinese consulates and Embassy in the US and racial attacks on Chinese and Asians.

Sherman arrived in China on Sunday evening from Mongolia.

The meeting was held in Tianjin as Beijing is not hosting any foreign dignitaries due to COVID-19 protocols.

On her arrival, she tweeted, "heartfelt condolences (from the United States) to those who have lost loved ones" in severe storms and flooding last week in China's Henan province resulting in the deaths of 69 people.

China also came under immense pressure mounted by the US and allies over the allegations of genocide in Xinjiang over mass detention camps holding thousands of Uyghur Muslims.

The Biden administration's special envoy on climate John Kerry visited Shanghai in April this year for meetings with his Chinese counterpart.

The China-US relationship turned adversarial under previous US President Donald Trump who besides imposing trade sanctions also squarely blamed China for the spread of the coronavirus, which had first emerged in Wuhan in December 2019 and the possibility of it leaking from a bio-lab in the city.

Biden sought to firm up Trump's stern China policy by uniting Washington allies like the EU, Canada, Australia and Japan, which has further riled China.

He had a lengthy phone conversation with Xi after he took over and reports say the two countries may work out plans for a bilateral summit soon.

"I know him pretty well," Biden said earlier and described Xi as "very bright" and "very tough" but without "a democratic, small D, bone in his body", highlighting the autocratic style of functioning of the 68-year-old Chinese leader.

Under pressure especially over the COVID-19, China is drumming up support against independent inquiry by the World Health Organisation into the origins of the coronavirus.

China has mounted a massive campaign at home and abroad to avert any such move to facilitate international investigators to probe the COVID-19 origins in Wuhan.

Zhao said about 55 countries including Russia, Belarus, Pakistan and Sri Lanka have written to the WHO expressing opposition to the politicisation of the COVID-19 origin.

Ahead of the talks, Wang Yi said on Saturday that China will give the US a "tutorial" on how to treat other nations equally.

"The United States always wants to exert pressure on other countries by virtue of its own strength, thinking that it is superior to others," he said, according to his comments posted on the foreign ministry website.

"However, I would like to tell the US side clearly that there has never been a country in this world that is superior to others, nor should there be, and China will not accept any country claiming to be superior to others,” he said.

In his speech at the talks, Xie said the China-US relationship is in a stalemate, fundamentally because some Americans portray China as an "imagined enemy," and Washington must change the highly misguided mindset and dangerous policy.

"It seems that a whole-of-government and the whole-of-society campaign is being waged to bring China down. It is as if when China's development is contained, all US domestic and external challenges would go away,” he said.

The US policy seems to be demanding cooperation when it wants something from China.

"China wants to work with the US to seek common ground while shelving the differences," he said.

"After all, a healthy and stable China-US relationship serves the interests of both sides. And the world expects nothing less from the two sides," he added, according to a report by state-run Xinhua news agency.