China is deeply grieved to see the outbreak of conflict between Ukraine and Russia and 'extremely concerned' over the damage done to civilians, Chinese Foreign Minister Wang Yi has told his Ukrainian counterpart Dmytro Kuleba and called on Kyiv and Moscow to resolve the raging crisis through negotiations. 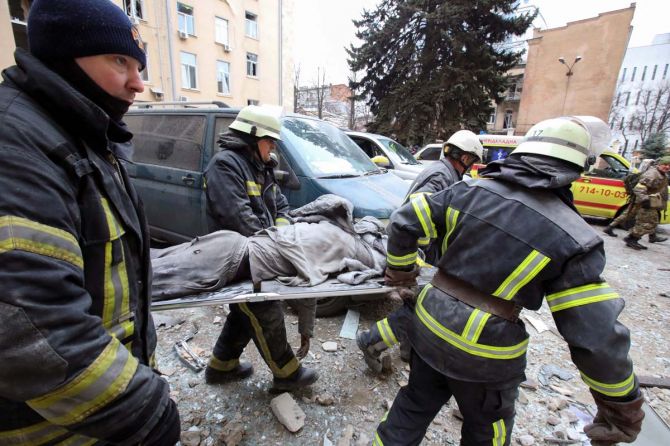 IMAGE: Rescuers carry the body of a victim on a stretcher outside the regional administration building, which city officials said was hit by a missile attack, in central Kharkiv, Ukraine, on March 1, 2022. Photograph: Vyacheslav Madiyevskyy/Reuters

The two ministers spoke for the first time on the phone on Tuesday since violence broke out in Ukraine following an attack from Russia.

Wang said that the situation in Ukraine has changed rapidly and that China laments the outbreak of the conflict between Ukraine and Russia and is 'extremely concerned' with the harm to civilians, China's state-run Xinhua news agency reported.

In expressing serious concern over the harm to civilians, Wang, however, was careful not to blame Russia, whose President Vladimir Putin has launched 'special military operation' against Ukraine and instead said, according to Foreign Ministry press release, China is 'deeply grieved to see the conflict between Ukraine and Russia and highly concerned about the damage done to civilians'.

China is a close ally of Russia and is walking a fine line by airing its concerns but not condemning Moscow's military offensive.

Refusing to criticise Russia's military action, which has entered a decisive phase with thousands of Russian troops massed on the outskirts of Ukraine's capital Kyiv, Wang Wenbin called for a 'political settlement that accommodates both sides' legitimate security concerns, achieves common security in Europe and promotes Europe's lasting peace and stability'.

"The Cold War mentality should be discarded completely. The legitimate security concerns of all countries should be respected. Given NATO's five consecutive rounds of eastward expansion, Russia's legitimate security demands ought to be taken seriously and properly addressed," Wang Wenbin said.

China is also in the process of evacuating over 6,000 of its students and nationals from Ukraine as the Russian offensive intensified.

In his phone talks with Kuleba, Wang Yi said China's basic position on the Ukrainian issue is open, transparent and consistent, and noted that Beijing always stands for respecting the sovereignty and territorial integrity of all countries.

Regarding the current crisis, China calls on Ukraine and Russia to find a solution to the issue through negotiations, and supports all constructive international efforts conducive to a political settlement, he said.

China always believes that one country's security cannot be at the expense of others' security, and security of one region cannot be achieved by expanding military blocs, he asserted.

As the fighting continues to expand, the top priority is to ease the situation as much as possible to prevent the conflict from escalating or even getting out of control, especially to prevent harm to civilians as well as a humanitarian crisis, and to ensure the safe and timely access of humanitarian aid, he said.

On China's position with regard to ensuring the safety of Chinese nationals in Ukraine, Wang urged Ukraine to assume corresponding international responsibilities.

The process of evacuating overseas Chinese and students from Ukraine is underway, he said, expressing gratitude to the Ukrainian side for support, cooperation and help from the Ukrainian government and society.

China appreciates Ukraine's launch of special evacuation trains for foreign nationals, which is in line with the international humanitarian spirit, Wang said.

Wang said he hopes the Ukrainian side will take all necessary measures to ensure the safety of Chinese nationals in Ukraine and continue to provide guarantee and facilitation for their evacuation.

According to the Chinese Foreign Ministry press release, Kuleba said that it is an important duty for Ukraine to ensure the safety of foreign nationals and that Ukraine pays great attention to China's concerns and is assisting Chinese students and nationals to evacuate smoothly.