The People's Liberation Army's troops stationed at the Line of Actual Control raise their combat readiness to the second-highest possible last week after an exchange of fire with Indian troops but the alert was eased following a meeting between external affairs minister S Jaishankar and his Chinese counterpart Wang Yi in Moscow, South China Morning Post reported citing Chinese military sources. 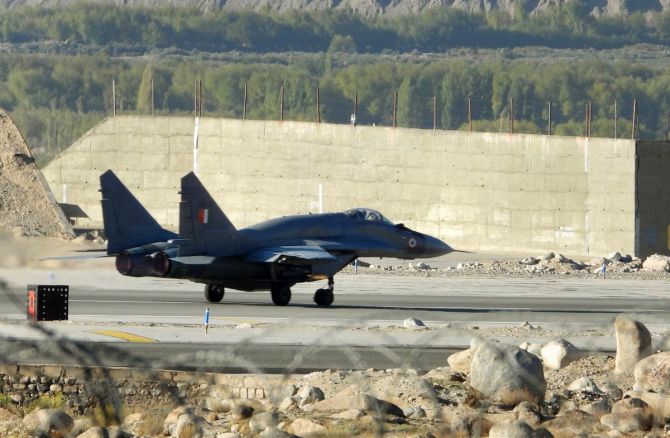 IMAGE: An Indian Air Force fighter jet on the runway in Ladakh amid the prolonged India-China face-off. Photograph: PTI Photo

It means more weapons and troops were deployed and training exercises were ramped up for commanders, officers and soldiers, a military source told the South China Morning Post.

The last time such a high level was employed by troops in the restive region was in 1987 when a skirmish in the Sumdorong Chu valley pushed the two sides to the brink of war, said the person, who asked not to be named.

The PLA has four grades of combat readiness.

The first level is used only when military leaders are convinced an armed conflict is inevitable.

"Since the combat readiness level was raised, commanders, officers and soldiers have been working around the clock, carrying out extra training and drills," the source said.

"The PLA mobilised more troops and weapons systems to the Line of Actual Control (the formal name for the disputed China-India border) in preparation for the worst," the source added.

The heightened state of alert was only relaxed after Wang met his Jaishankar in Moscow on Friday on the sidelines of the Shanghai Cooperation Organisation summit, a second source said.

Jaishankar met Wang on the sidelines of the Shanghai Cooperation Organisation Foreign Ministers' meet in Moscow after Chinese soldiers fired in the air while attempting to close in on Indian positions across the LAC in eastern Ladakh.

Tension is high along the LAC as Indian and Chinese Army are engaged in a standoff at several points.

According to a joint press statement about the meeting, the two leaders had a "frank and constructive discussion on the developments in the India-China border areas as well as on India-China relations."

"The two ministers agreed that both sides should take guidance from the series of consensus of the leaders on developing India-China relations, including not allowing differences to become disputes," it read.

The meeting came days after The Indian Army had said on Tuesday that Chinese troops have been "blatantly violating agreements and carrying out aggressive manoeuvres".

In a statement about the Thursday's meeting, the Chinese defence ministry said the two sides have reached a five-point consensus regarding the current situation after a full in-depth discussion, says a statement issued by the Chinese foreign ministry.