Chinese Premier Li Keqiang on Monday visited Wuhan, the first such trip by a top leader to the epicentre of the coronavirus outbreak, to boost the morale of millions of beleaguered people and medical staff, as Beijing reported its first death from the disease that has killed 82 people, infected over 2,700 and prompted two top officials to offer their resignation. 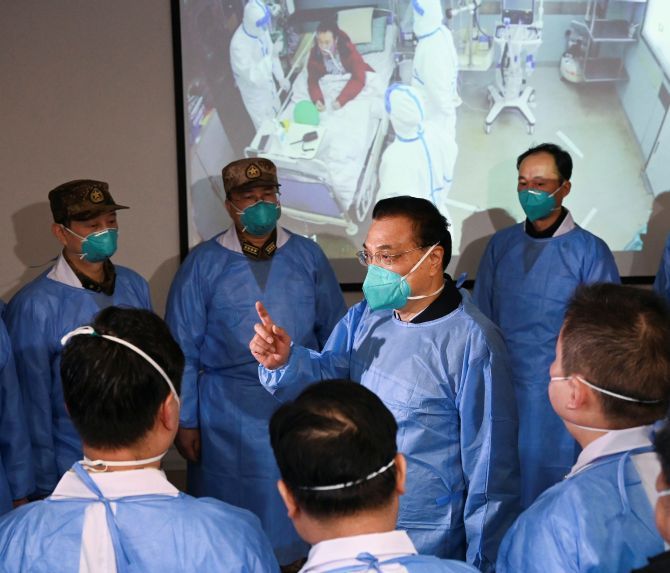 IMAGE: Chinese Premier Li Keqiang wearing a mask and protective suit speaks to medical workers as he visits the Jinyintan hospital where the patients of the new coronavirus are being treated following the outbreak, in Wuhan, Hubei province, China. Photograph: cnsphoto via Reuters

A sense of disquiet prevailed in Beijing as officials announced the capital's first death from the deadly virus, a grim reminder that the epidemic has begun to take toll outside Hubei province.

The victim was a 50-year-old man who had visited Wuhan and later fell sick after his return. Over 70 cases have been recorded in the Chinese capital of 20 million people.

Li, the second ranking leader of the ruling Communist Party of China who headed a high-powered working group to coordinate the virus control efforts, arrived in Wuhan on Monday to inspect the epidemic control and prevention work.

Wearing a mask, which now has become a mandatory in Wuhan and most part of China to avoid contracting the deadly virus, Li attired in special medical coat inspected some of the hospitals treating coronavirus patients.

He spoke to doctors with a walkie-talkie and told them to prioritise the safety and health of the people and called for strict implementation of containment measures.

He also inspected the construction of the two makeshift 2,300 bed hospitals being built in about two weeks.

The virus has killed 82 people and infected 2,744 across China. The confirmed cases of pneumonia caused by the virus officially described as 2019-nCoV included 461 patients who are in critical condition. As many as 51 people have recovered while there were currently 5,794 suspected cases, the National Health Commission said.

Amid rising public anger over the unprecedented health crisis, Wuhan Mayor Zhou Xianwang said that he and the city's Party secretary are willing resign "if it helps to contain" virus which originated from the city.

Zhou admitted that the lockdown of Wuhan, a city with a population of more than 11 million, was a tough decision and a first in human history.

On Sunday, he said five million people from Wuhan left the city before it was locked down on January 23.

"...We are willing to take whatever responsibility…including the resignation of Wuhan Party Secretary Ma Guoqiang and myself," Zhou told the state-run CCTV.

He also admitted that information was not disclosed in a timely manner at the preliminary stage of the virus outbreak.

There is also strong criticism from the netizens about Zhou and other officials who addressed the media without even properly wearing masks.

Meanwhile, the World Health Organisation (WHO) Director-General Tedros Adhanom Ghebreyesus arrived in Beijing to review the measures to contain the virus.

WHO has so far withheld announcement of the global public emergency over coronnavirus as it spread to several countries.

'We are working 24/7 to support China and its people during this difficult time and remain in close contact with affected countries, with our regional and country offices deeply involved,' Tedros tweeted.

WHO is updating all countries on the situation and providing specific guidance on what to do to respond, he said.

The Chinese government is also facing the heat over thousands of foreigners, including a few hundred Indians, mostly students, who are stuck in Wuhan city which is under lockdown.

With the Chinese government permitting US to airlift its Wuhan-based diplomats and Americans citizens, citizens of other countries also have been asking Beijing to allow them to leave. France, UK and South Korea too are trying to airlift their citizens stuck in Wuhan.

A silver lining in the whole crisis is that no foreigner other than Chinese have been infected with the virus so far in China.

The Indian officials on Monday met the Chinese Foreign Ministry officials apparently to discuss the arrangements to evacuate Indians stuck in Wuhan.

A decision on the issue was expected to take place shortly.

The Foreign Ministry officials also held meetings with diplomats of several countries. Over 2,000 Pakistani students in a video message made a request to their government to help them to leave the city.

Meanwhile, the train and bus services between Beijing and neighbouring Tianjin have been suspended.

China has also extended the New Year Festival holidays till February 2 to prevent reverse migration of millions of migrants works to return to their work from holidays.

Passengers with abnormal body temperatures will be sent to hospital.