China has reported 22 new deaths from the deadly coronavirus, the lowest number of fatalities in more than a month, taking the death toll to 3,119, while the new confirmed cases hit a record low to 40, prompting authorities to close 11 temporary hospitals at the virus epicentre in Wuhan. 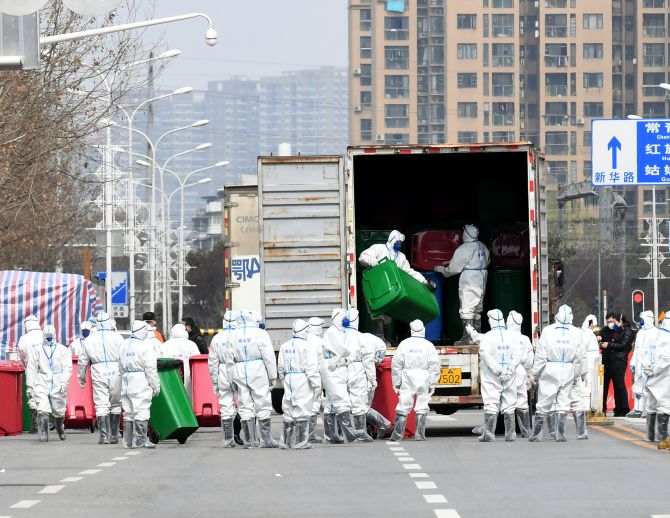 IMAGE: Workers in protective suits take part in the disinfection of Huanan seafood market, where the novel coronavirus is believed to have first surfaced, in Wuhan. Photograph: Reuters

China's National Health Commission, said on Monday it received reports of 40 new confirmed cases of the novel coronavirus, the lowest number of fresh cases since it started reporting the data in January, and 22 deaths on Sunday on the Chinese mainland.

The overall confirmed cases on the mainland reached 80,735 by the end of Sunday which included 3,119 people who have died so far, 19,016 patients undergoing treatment and 58,600 patients discharged after recovery, the NHC said.

Among the deaths on Sunday, 21 were in Hubei Province and one in Guangdong Province.

Meanwhile, 60 new suspected cases were reported taking the total to 421 people, it said.

Also on Sunday, four imported cases (people coming from abroad) of novel coronavirus infection were reported on the mainland, all of which were in Gansu Province. By the end of Sunday, 67 imported cases had been reported, the NHC said.

By the end of Sunday, 114 confirmed cases, including three deaths have been reported in the Hong Kong Special Administrative Region (SAR), 10 confirmed cases in the Macao SAR, and 45 in Taiwan including one death, state-run Xinhua news agency reported.

Meanwhile, China has begun dismantling a host of temporary hospitals built-in big public places like auditoriums and sports complexes in Wuhan set up during the massive surge of virus cases in January and February.

China has built two makeshift hospitals with 2,300 beds capacity in just about 10 days' time in early February and later started converting public buildings into hospitals to meet the rush of patients.

Two makeshift hospitals were suspended on Sunday in Wuhan, capital of central China's Hubei Province and the heart of the novel coronavirus outbreak, as the number of patients continued to drop, local officials said.

The city has suspended the operation of 11 makeshift hospitals, which were converted from public facilities for the treatment of patients with mild symptoms in the city, the report said.

One of these two hospitals, converted from a sports venue, had 1,000 beds with more than 1,000 medical and other staff. A total of 1,056 patients have been treated here since February 12, with no medical staff infected.

Another hospital, covering over 6,100 square meters treated 990 patients with 996 beds since February 17.

The medical staff in these hospitals will be on standby.

The provincial health commission said earlier that Hubei will gradually shut down temporary hospitals and cut the number of hospitals designated for the disease while maintaining strict prevention and control measures.

Hubei province and its capital Wuhan continued to be in lockdown since January 23 with all public and private transport banned. Officials say the restrictions would be gradually eased keeping up with the trend of the COVID-19 slowdown.

According to the daily situation report on the COVID-19 released by the World Health Organisation on Sunday, seven more countries have seen local transmission of the virus, bringing the number of countries and regions where local transmission emerged to 53 in addition to China.

A total of 105,586 confirmed cases of the COVID-19 have been reported worldwide as of Sunday, an increase of 3,656 infections from the previous day, including 3,610 new cases outside China. 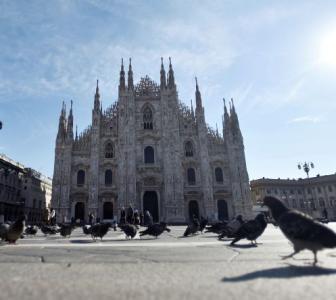 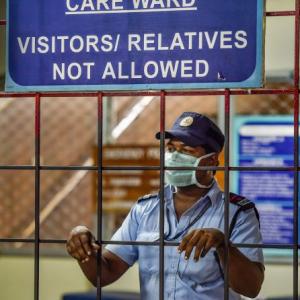