Militants from the Islamic State of Iraq and Levant claimed that they had executed 1,700 Iraqi Shia air force recruits in Tikrit, posting some gruesome photos online to support their claim.

The army personnel are pictured being led away and then lying in trenches before and after their "execution". 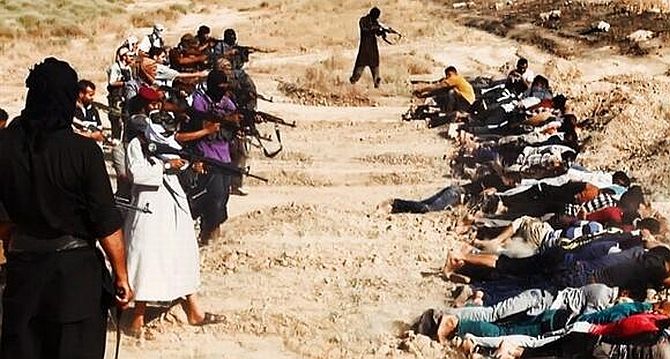 Iraqi military spokesman Lt Gen Qassim al-Moussawi said the pictures were authentic and depicted events in the Salahuddin province, according to the BBC. But the authenticity of the photographs cannot be verified.

The United States has condemned the reports of massacre of the soldiers as "horrifying" and urged all Iraqis to unite against this violence, the State Department has said.

"The claim by the Islamic State of Iraq and the Levant that it has massacred 1,700 Iraqi Shia air force recruits in Tikrit is horrifying and a true depiction of the bloodlust that these terrorists represent," US state department spokesperson Jen Psaki, said.

The US condemns these tactics in the strongest possible terms and stand in solidarity with the Iraqi people against these horrendous and senseless acts of violence, she said.

"While we cannot confirm these reports, one of the primary goals of ISIL is to set fear into the hearts of all Iraqis and drive sectarian division among its people," Psaki said.

Terrorists who can commit such heinous acts are a shared enemy of the US, Iraq, and the international community, Psaki said.

"This underscores the need for Iraqi leaders from across the political spectrum to take steps that will unify the country in the face of this threat," she said, adding the US will do its part to help Iraq move beyond this crisis.

The US urges all Iraqis to unite against this violence and continue to reject the path of hatred that ISIL represents, she said.

"The United States strongly supports Iraq and its people as they face security challenges from violent extremists.

The people of Iraq have repeatedly rejected violent extremism and expressed their desire to build a better society for themselves and for their children," Psaki said.

The US has augmented security at its embassy in Baghdad, from where it has relocated some of its staff in the face of a militant advance in the country, the State Department has said. "At the request of the State Department, the US military is providing security assistance for our diplomatic facilities in Baghdad," Pentagon Press Secretary, Rear Admiral John Kirby, said.

However, he did not provide any number of its personnel in protection of US Embassy in Baghdad.

A small number of department of defence personnel are augmenting state department security assets in Baghdad to help ensure the safety of US facilities, Kirby said. CNN said between 50 and 100 US marines and US army personnel have arrived at the US embassy in Baghdad.

Image: These photos were posted by the Islamic State of Iraq and Levant on its Twitter account, which has now been suspended