The four-and-a-half-year-old son of Bihari migrants based in Delhi died at the railway station in Muzaffarpur on arrival by a 'Shramik Special' train, while his father desperately hunted for some milk he believed will save his child. 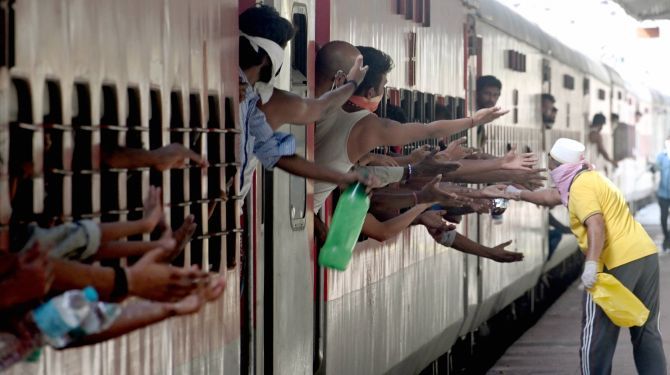 IMAGE: A volunteer distributes food packets and water bottles among migrants travelling in a train to reach their native places, during the ongoing COVID-19 lockdown. Photograph: PTI Photo

Maqsood Alam alias Mohd Pintu, the bereaved father, worked as a house painter until the coronavirus-induced lockdown rendered him jobless and drove him to penury, forcing the family to leave their rented home in a Delhi slum and head home after selling off their meagre belongings.

Accompanied by wife Zeba and son Ishaq, Alam had started the journey with some excitement, trying to forget the travails of the past and hoping to reach his native place in West Champaran district on Monday, the day Eid would be celebrated.

The child had fallen ill, apparently because of oppressive heat. By the time our train reached Muzaffarpur junction his condition had deteriorated considerably. I ran pillar to post searching for some milk for my son. The administration took too long to respond and the child lost the battle for life, alleged Alam.

"We saw the prospect of reaching home on Eid as a good omen. Who knew that God had something else in store for us," said the grief-stricken father, his wife still in a state of shock and unable to speak.

Deputy Superintendent of Police, Railway, Ramakant Upadhyay, however, claimed the boy was ailing for some time and had died before the train reached Muzaffarpur station.

The family boarded a Danapur-bound train and the boy, who was apparently in poor health for some time, fell seriously ill on board. From Danapur they took one of the intra-state trains, headed for Sitamarhi, which was to make a stopover at Muzaffarpur junction.

"The child had died before the train pulled up at the platform here and we rushed as soon as we got information, Upadhyay said.

He said arrangements were made for the family's journey to West Champaran by the administration, which also made an ex-gratia payment.

Incidentally, on the very same day and around the same time, a train pulled up on a different platform carrying hordes of migrants. Among whom was a woman who breathed her last shortly before Ishaq's death.

Arvina Khatun, 35, a widowed mother of two and said to be mentally disturbed, lived in Gujarat with her sister and brother-in-law. She fell ill on the Shramik Special they had boarded for reaching their native district of Katihar.

She died a few minutes before the train reached Muzaffarur junction around noon on Monday and her body was brought down by her relatives with the help of co-passengers.

Video footage of her younger child, barely a year old, playing with a blanket placed on the womans body, as if in an attempt to wake her up, has gone viral and triggered outrage on social media.

Upadhyay said the body was taken into custody for post-mortem and sent to Katihar after completing the legal formalities.

According to some estimates, more than 15 lakh migrant workers have returned to Bihar from across the country while five lakh more are likely to arrive over the next few days. 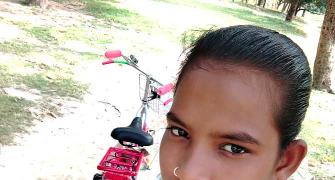 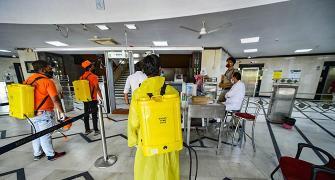 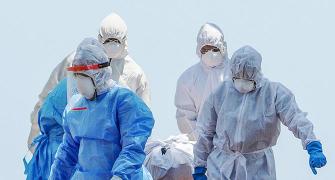 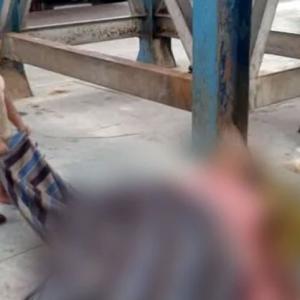 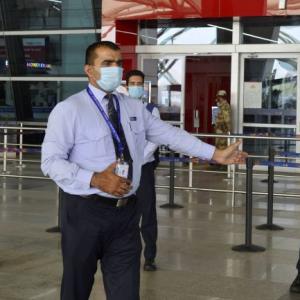