Source: PTI
December 15, 2011 17:24 IST
As Home Minister P Chidambaram came in the line of opposition fire, the Delhi government on Thursday revoked its earlier decision not to press for prosecution of cases against a hotelier said to be a former client of the minister.

The decision was taken by Lt Governor Tejinder Khanna against the backdrop of controversy over the alleged conflict of interest involving Chidambaram in withdrawal of three cases against his client S P Gupta, Chairman, Sunair Hotels Limited, New Delhi.

'Keeping in view this recommendation of the director of prosecution, the home department again submitted the case of the LG with the recommendation that withdrawal of prosecution in respect of the above cases may not be pressed before the competent court and the trial may proceed further on merits.  This recommendation has been approved by the LG on 15.12.2011,' a Delhi government press release said.

The director of prosecution had, on detailed examination of the contents of the chargesheets against the hotelier, had recommended that there was sufficient evidence on record against the accused and the courts may not allow withdrawal of prosecution.

The LG had on November 18 approved withdrawal of theses cases on the basis of recommendations by the screening committee headed by principal secretary (home).

The LG's decision climaxed a day of drama in Parliament where the Bharatiya Janata Party and some other opposition parties paralysed business demanding the resignation of Chidambaram. While the Lok Sabha was adjourned for the day, the Rajya Sabha was adjourned till noon over the issue. 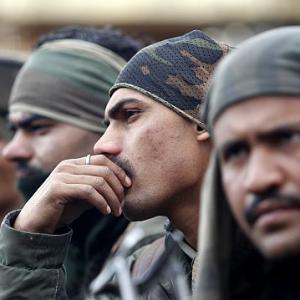