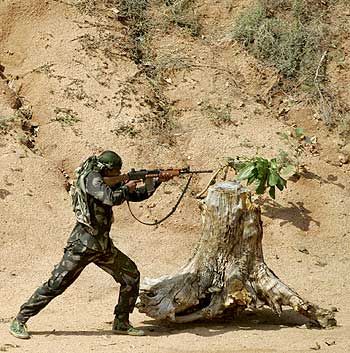 At least 17 people, including senior Congress leader Mahendra Karma, were killed and former union minister V C Shukla and 19 others injured when heavily-armed Maoists ambushed a convoy of party leaders inside a dense forest in Chhattisgarh's Bastar district.

Joint Secretary (Naxal management) in Union Home Ministry M A Ganpathy told PTI in New Delhi that 17 people were killed and around 20 injured in the attack.

At a late night press conference, Chhattisgarh Chief Minister Raman Singh put the number of dead in the Naxal attack at 16 and did not give any figure of the injured.

Eighty-four-year-old Shukla underwent an operation in Jagdalpur hospital for the three bullets he had received in the attack to be taken out of his body.

Congress President Sonia Gandhi said in New Delhi that Shukla was hit in his stomach. Raman Singh said the condition of Shukla was stated to be stable.

Besides Karma, former Congress Member of Parliament Gopal Madhavan and ex-MLA from Rajnandgaon Udya Mudaliyar were also shot dead and prominent woman tribal leader Phulo Devi Netam, Bastar, wounded by the Maoists who attacked the convoy at around 5:30 pm when they were returning from the party's "Parivartan" rally.

Karma, a former Home Minister and founder of "Salwa Judum" (anti-Naxal operation by vigilante groups), was surrounded by about 100 to 150 Maoists who peppered his body with bullets. The Maoists had put up road blocks by felling trees before triggering a landmine blast that hit one of the vehicles in the convoy and opening fire, police sources said.

After carrying out the attack, the ultras set nearby trees on fire. Top officials of the force, deployed for anti-Naxal operations in the state, will visit the encounter site on Sunday, official sources said.

The Central Reserve Police Force has also asked all its formations in the state to remain on high alert in the wake of Saturday’s deadly attack in south Bastar.

Union Minister of State for Home R P N Singh, who is visiting Chhhattisgarh on Sunday to take stock of the situation in the wake of the Maoist attack, said in New Delhi that "our top priority is to find the missing Pradesh Congress Committee chief and his son".

An air ambulance will be sent to Chhattisgarh on Sunday morning to bring back the injured for treatment after Raman Singh spoke to Dr Naresh Trehan, Chairman and Managing Director of Medicity Medanta in Gurgaon.

Raman Singh a three-day state mourning has been declared from Sunday, and all those who died in the attack will be given a state funeral.

Karma had explained why he opposed the Maoists in an exclusive interview to Rediff.com, three years ago. Read the interview here.