Why did Chennai go under in the recent rains? R Ramasubramanian paints a familiar picture of dismal urban town planning, civic short-sightedness, and rampant development that caused the recent nightmare. 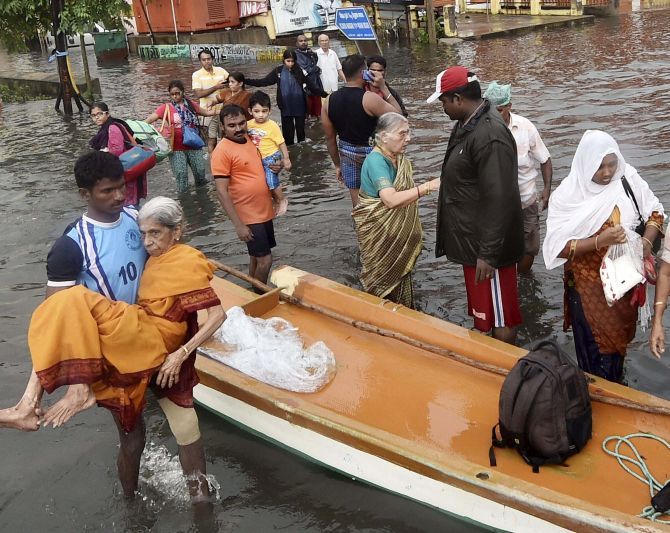 The city of Chennai is limping back to normalcy. The rains which battered the city and two of its neighbouring districts, Kanchipuram and Tiruvallur, for nearly a week have stopped. Two army columns rushed in from the Madras Regiment have been asked to stay back as a standby after being deployed for a day in rescuing residents in the suburbs. This is the first time since 1985 that the army has been called in for rain relief work in Chennai, a city with a population of 1.2 crore. Even during the tsunami 11 years ago, the army was deployed only in Cuddalore and Nagapattinam, and Chennai was handled by the local machinery.

Now, the million-dollar question is, what are the lessons to be learnt from these rains for the government of Tamil Nadu and its people? The fact is, in spite of there being no cyclone, the rains crippled the lives of lakhs of people for nearly a week. Though heavy rains have lashed the city in the past, too, this time the damage was much greater. The reason is not only the inadequate preparedness of the state machinery but also the inbuilt structural weaknesses of the whole system which have piled up over a period of time.

Environmentalists and water experts list at least three reasons for the calamity in Chennai, and this they say has happened over decades and more.

First is the massive shrinking of the Pallikaranai marshlands which are nothing but nature’s gift to the city. The marshlands, situated in the south of Chennai, drain water from a 250 square kilometre catchment area. Even a couple of decades ago it occupied 50 square km of area, but today it has shrunk to less than five square km in size.

Massive construction and a dumping yard are playing havoc with this ecosystem. It may be an irony of sorts that the National Institute of Ocean Technology is situated at the edge of this marshland from where, among other things, it studies the environmental impact of construction activity on water bodies.

The marshlands are abutted by the ever-expanding Vellachery, Perumbakkam, Old Mahabalipuram Road, etc. Velacherry is home to the largest mall in the city -- which fact alone underscores the nature of city planning.

The second major reason is not properly maintaining the three beautiful rivers of Chennai. Adyar river, Buckingham river and Coovum are the backbone of Chennai’s ecosystem. But alas, the estuaries of these three rivers are not cleaned properly and this creates havoc during heavy rains. Instead of flowing smoothly into the Bay of Bengal, the water accumulates at the mouth of the river, and flows back to the city, causing flooding.

Even if desilting of water bodies was done in time, the situation would not have been any better. The simple reason is the massive encroachment of water bodies which has happened over three decades and more, and caused monumental damage to Chennai’s ability to withstand huge rains.

Environmentalists say the concentration of several MNCs and hundreds of IT companies in and around Chennai is exerting enormous pressure on the city’s resources. “We have big names like Ford, St Gobain, Hyundai, Foxconn, Nokia etc situated in the first 50 km of Chennai. In the southern side we have at least 500 IT companies and remember, this area is closer to the Pallikaranai marshlands. On the one hand we have successfully destroyed the natural water bodies and on the other hand we are recklessly expanding our workforce that is depleting our natural resources,” says G Sundararajan of Poovulagin Nanbargal, an environmentalist group working actively in the state.

The crux of his argument is that if only the government had ensured development in an even manner across the state, the pressure of accommodation and other related issues would had been reduced to a great extent. He also warns that like Delhi, the pollution levels in Chennai are also constantly on the rise.

“Unlike Delhi, Chennai’s additional problem is the Kalpakkam atomic research centre which is just 55 km from Chennai. Hot water from the atomic plants is continuously let into the sea. Clubbed with this are the ever-growing carbon emissions from several factories. Our seas are not a dumping yard and Chennai is contributing enormously to the rise in global warming. These factors are also playing with our water bodies,” adds Sundararajan.

Chennai and suburbs are growing rapidly and there are new settlements coming up month after month. But basic norms are thrown to the wind while granting sanctions. For example, there is no drainage map available for the suburbs. Though there are drainage canals which connect the suburbs’ new settlements with the city, a drainage map, which is the basic blueprint for any civic administration, is not available with anyone. From this, one can understand the nature of civic administration in the state. This is the culmination of work over three decades and more by successive state governments.

Experts and retired bureaucrats warn that unless something drastic is done, the situation may become extremely dangerous in the near future. This time, although 200 people have died due to rains across the state, the loss of lives in Chennai was comparatively minimal because of two things. One is that the rains stopped just in time, and the second is the deployment of the army at the right time.

“It’s time for proper intervention. Unauthorised constructions must be demolished mercilessly. No construction activities should be permitted in aquifer recharge areas near any reservoirs. Monitoring agencies with proper legal mandate should be established. If these things are not done on a war footing, the situation will go from bad to worse,” warns M G Deivasahayam, a retired IAS officer and former chief secretary of Haryana.

Seasoned opinion among those in the know of things is that the Chennai floods are a clarion call for government and policy-makers to act. If they do not heed it, the people of Tamil Nadu will have to brace themselves for severe natural calamities in the future.

Image: A rescue operation in progress in Chennai during the recent downpour. Photograph: PTI Photo.