Since the disastrous 2005 floods, that crippled the nation's business capital, little work has been done on disaster management and relief preparations.

If ten years after the Mumbai floods, the city still stands at the same scale of preparedness as Chennai it will prove woefully inadequate during a state of emergency, says Sanjay Jog. 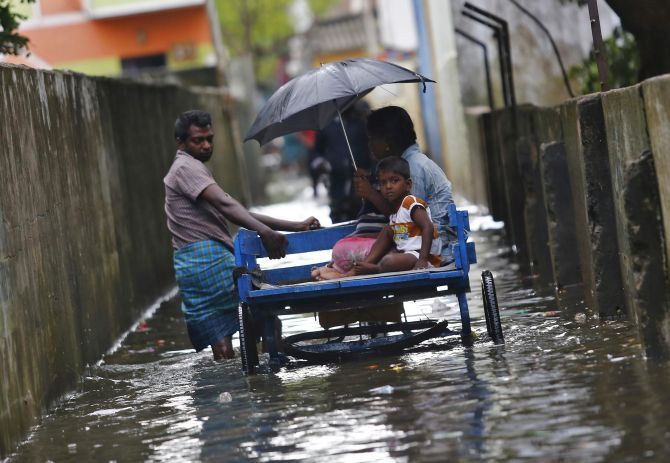 A man carries his family on a rickshaw cart as he wades through a flooded street in Chennai, India. Photograph: Anindito Mukherjee/ Reuters

On June 20 this year, when Mumbai got 283 mm of rain in 24 hours and the Mithi river was at the danger mark, 25-year-old Kiran Shinde received an advisory from a non-governmental organisation to vacate his home.

Shinde, who stays in a colony along the Mithi in the city's north-west, considers himself lucky the rains stopped in a few hours.

On the same day, Aslam Sheikh, who stays in the flood-prone areas in Kurla in north-east Mumbai, was making desperate calls to friends and family for urgent help to move his wife to a hospital in Thane.

His neighbours arranged for a makeshift boat to transport his wife to a nearby taxi stand.

Shinde, Sheikh and many others in the city's commercial capital say every time they see dark clouds, their minds go numb, courtesy the July 26, 2005, floods when a little over 1,000 people died in the city.

The overarching fear is that such disasters could again strike, unless the state government and the civic body implement a detailed disaster management plan on a war footing. The Chennai floods have compounded that fear.

Brihanmumbai Municipal Corporation's former commissioner Sitaram Kunte says a lot of work on improving storm-water drainage has been done after 2005, based on the recommendations of a high-powered committee chaired by water expert Madhav Chitale.

However, he adds the full effect will be felt "only after all the components are fully completed".

That last bit of comment is not unfounded. A civic official admits unplanned rampant urbanisation, loss of water bodies due to encroachments, dilapidated water drainage systems that lead to silting and choking can lead to flooding in heavy rain. Landfills, reclamation and quarrying of hills to meet so-called development needs have altered the city's topography completely.

The core of the city's present SWD system is about 70 years old, comprising 400 km of underground drains, which can handle 25 mm of rains per hour at low tide. If the rain intensity is more and high tide occurs, there is always a possibility of heavy waterlogging.

However, Kunte says all new SWDs have been designed to absorb 50 mm/hour rainfall intensity and a master plan for drains' construction is being implemented but he says the main constraint is the slums and structures along the alignment of these drains.

"The entire BMC area has been contour-mapped. Computer modelling of all watersheds has also been done. Thus, a lot of work on improving SWDs has been done after 2005," says Kunte.

The reality is more complex. BMC's much-debated Brihanmumbai Storm-water Drainage (Brimstowad) project, which aims to upgrade the old system, is behind schedule. The project was proposed and planned after the floods in 1985, when the entire city was flooded due to heavy rain.

Meanwhile, the project cost has escalated to Rs 4,000 crore from the initial Rs 1,200 crore estimate. Eight pumping stations with heavy duty pumps to discharge storm-water were also planned, of which four have been commissioned, two are under construction and another two are awaiting various clearances.

Conservation Action Trust executive trustee Debi Goenka says Brimstowad is not going to solve the drainage problems of Mumbai's suburbs; in fact, he contends, this would make it worse. "Brimstowad is essentially converting the natural creeks into concrete canals.

Walls have been built on the sides that are stopping sea water from spreading into the mangrove areas, killing them. New buildings and slums are sprouting along these canals, as roads have been built along the walls on both sides.

In the event of a flood, the sea water will now penetrate deeper into the city and aggravate the flooding," he opines.

Mithi's development and its protection are also moving at a snail's pace. The poor state of the river (also known as the Mahim River) in 2005 was blamed by many for exacerbating the flood disaster. Officials at BMC and the state urban development department say the storm-water drainage for the Mithi's catchment areas is disturbed due to encroachment of hutments, processing industries, workshops and scrapyards situated along its banks.

"Direct discharge of untreated sewage, wastewater from unauthorised settlements and industrial effluents along the river's course are a cause of concern," an official notes.

Government officials hope the Mithi River Development and Protection Authority's proposal to increase the catchment height of the Powai Lake in north-west Mumbai by up to four metre in places might well keep floodwater away from the river in times of heavy rainfall.

About Rs 1,200 crore has been spent till now on development activities of the Mithi but the work remains non-satisfactory.

Recently, State Environment Minister Ramdas Kadam reviewed the Mithi rejuvenation plan and pulled up the departments concerned for continuing use of the river as a dumping ground for sewage, industrial waste and garbage from those living along its banks.

Kunte says Mumbai 2005 and Chennai 2015 are warning signs we all should heed. Chennai is indeed a wake-up call for Mumbai.